Woman delivers baby in car - with help of passing cyclists

When his pregnant wife's water bag broke at 5.30am on Sunday (Sept 12), he thought there was no need to rush.

After all, it also happened before the births of the couple's first two children, and they ended up spending 24 hours waiting in the labour room, unnecessarily anxious.

So, instead of calling for an ambulance, Mr Muhammad Annur Mohammad booked a private-hire vehicle to take them from their home in Marsiling to KK Women's and Children's Hospital (KKH).

But the baby had other ideas and arrived sooner than expected - right in the back seat of the Tada car.

Speaking to The New Paper yesterday, Mr Muhammad, 31, said: "While we were on the expressway, my wife suddenly held on to the seat in front of her and screamed, 'I cannot tahan (control in Malay)!'."

"I tried to calm her down but I myself was panicked and stressed."

While trying to assist his wife, Ms Mardhiah Abdul Malek, 31, he said he could feel the head of the baby.

"I switched on the car's overhead light and realised my hands were full of blood. I knew at that point the baby was halfway out," he added.

As they were still quite a distance from the hospital, Mr Muhammad felt it would be better for his wife if the vehicle was stationary. He told the driver to exit the expressway and stop nearby.

They ended up at a bus stop near Springleaf MRT station in Upper Thomson Road. The driver called for an ambulance and then tried to flag down cars to ask for assistance.

He managed to get the attention of a group of cyclists, one of whom was a doctor.

Mr Muhammad, a food delivery rider, said: "We were a bit concerned because the baby was not crying, but the doctor checked her breathing and other vitals and reassured us that she was okay."

An ambulance soon arrived to take the couple and their newborn girl to KKH. Mother and baby were warded for observation. 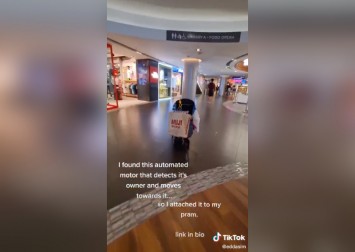 The baby had a low blood count on Sunday, but it has gone back to normal.

A relieved Mr Muhammad said he and his wife are thankful to the driver for the part he played in the birth of their daughter.

"He went out of his way to get help and did not make a fuss despite the mess that was left behind in his car," said Mr Muhammad.

"I tried offering him extra money but he refused so I put some money in his car before we left."

Tada's general manager Jonathan Chua said the ride-hail service operator will be giving the driver a token of appreciation along with some money to cover his loss of income while his car is at a professional cleaning service.

The company will also be offering Mr Muhammad's family a month's worth of free rides and grocery vouchers.

It will also be giving all first-time riders a $3 discount when they use the promo code.

Reflecting on Sunday's events, Mr Muhammad said: "This kind of thing happens only in the movies and is something my wife and I will never forget."