The woman who accused People's Action Party (PAP) new face Shawn Huang of behaving badly in the past has retracted the allegations, saying her assessment may have been overly harsh and she might have overreacted.

The woman, who calls herself Lin Leo on Facebook, accused Mr Huang of "(throwing) food back" at officers during rehearsals for the National Day Parade in 2018. Mr Huang was the parade commander that year.

Mr Huang, 37, in the first of two detailed Facebook posts yesterday, rebutted the accusations and gave a detailed account of what had happened in 2018.

Referring to the incident, Mr Huang, who on Friday was unveiled as a PAP candidate, said he was able to deduce that the person making the allegations was a warrant officer (WO) in charge of the NDP logistics control group in 2018.

Mr Huang said he had approached the group to ask for lunch during a rehearsal after he realised his group did not have any lunch catered.

The group would usually have rations to spare, he thought, which might otherwise get wasted.

However, the WO in charge refused to give him any food, Mr Huang said.

He said: "I tried to reason it out with the WO that the rations would otherwise be disposed anyway.

"However, the WO insisted, and I decided that rather than pursuing it further, I decided to leave the tent and went elsewhere to ask for a pack of food."

When Mr Huang went back to his tent after lunch, he found a packet of food on the table, which seemed to have been left for him.

As he had eaten, he "politely passed the ration back". 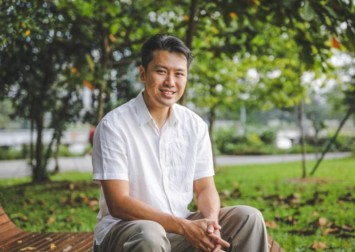 Said Mr Huang: "To help future ration distributions, I highlighted to them that we could practice some flexibility in the distribution of rations.

"They agreed. I did not pursue the matter further."

Mr Huang said he tried to contact the WO who had written the post so that he could clarify and explain what had happened that day, but he was unable to as the post was removed.

He added that he wished her well and thanked everyone who had spoken up in support of him.

Ms Lin Leo, in a Facebook post late last night, said that she may have overreacted and was too harsh in her assessment of Mr Huang.

She also apologised for her harsh language and conceded that her judgment of Mr Huang's character did not take into account the full picture of the kind of person he was.