Bird droppings on the floor of the HDB block in Serangoon.

For the past two years, residents in Block 212 Serangoon Avenue 4 have had to contend with wild birds excreting on their freshly-washed laundry and windows.

A female neighbour living in that block who frequently feeds these birds from her kitchen window, complained residents, reported Shin Min Daily News on Saturday (May 7).

"Bread crumbs are seen almost every day on the ground floor of the HDB, so I suspect the neighbours are feeding the birds with bread," said Wang, a 64-year-old resident there.

As a result of the frequent feeding, these birds often congregate in large flocks on the window sills, leaving their droppings on the laundry lines of those living in that block.

Homeowners living below the alleged offender said they often have to rewash their laundry.

Resident Wu, 65, said: "They didn't start feeding the birds until about two years ago." 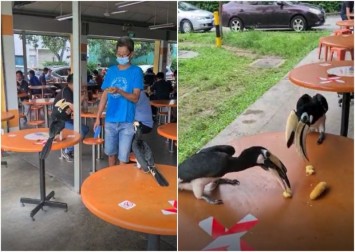 When approached by a Shin Min Daily News reporter regarding the feeding, the culprit said she doesn't that feel her actions are wrong and unapologetically said that feeding the birds is her personal right and that Singapore is a Garden City.

"It is my personal right to feed the birds, and it will not affect other units at all. I don't understand why the neighbours are so angry", she retorted to that reporter.

The town council told the Chinese daily that act of feeding wild birds is illegal and that the faeces of wild birds is not only unsanitary, the food residue will also attract other pests.

Under the Wildlife Act, it is illegal to feed any wild animal, including its young.

First-time offenders can be fined a maximum of $5,000 while repeat offenders face a maximum fine of $10,000.

The town council said it has notified the NParks, and a Member of Parliament for that estate has also visited the units involved, reported Shin Min.

In 2021, a 44-year-old woman in Singapore was fined $3,000 for repeatedly feeding birds from her vehicle. She was observed throwing food to doves, mynahs and other wild birds, reported CNA.