Woman smacks toddler at Hougang Swimming Complex while others watch on

A woman was caught on camera repeatedly hitting and slapping a child at Hougang Swimming Complex.

Lara, who recorded a one-and-a-half minute video of the incident, expressed concerns for the child's well-being as well as guilt over her own lack of intervention in that moment.

She recounted: "The woman slapped the child once and he mirrored her action lightly. However, she went into a full-blown adult tantrum by pulling, dragging and slapping him for the public to watch.

"The whole ordeal that I (and 20 over people) witnessed went on for about 30 minutes, with pulling and dragging involved."

In the video, a woman is seen hitting, slapping and chiding a toddler as he lies down on the ground. He then flaps his hands at the woman, which leads her to smacking him multiple times.

About 28 seconds into the video, the woman pulls the boy up from the ground by his arms and lifts him onto the bench. She appears to be struggling.

When the child is seated, the woman squats down and speaks to him, before slapping both sides of his face repeatedly.

Shouts from the woman, a loud scream from the child and his crying can be heard clearly from 1:10 of the video onwards.

Lara said: "Please, my intention is to create awareness and help the poor toddler. He appeared to have an older brother who was told to stand at the side and who was too scared to react, not to mention shy to face the rest of us.

"Sadly, so many of us just watched on, even the lifeguards. We were about four metres away on the other side of the pool, but we could hear the slapping sounds. No one intervened.

"In the end, the woman pulled the already weak little boy up and forced him to walk to the toilet. I couldn’t record further as I had little ones with me too."

Lara told Stomp that she feels "really guilty" for not approaching the trio and hopes that by sharing her video, "help can be rendered to these poor children".

She added: "I did not make a police report and I feel sorry for not reacting.

"To be honest, I wanted to approach the woman to ask if she needed help. Maybe to cool down while I sat with her kids, but I was afraid that the child would get it even worse because a stranger tried to help him.

"The woman needs help and her children need it even more.

"If this can be done in public for the world to watch without anyone bothering to intervene to help the poor kids, I cannot imagine what is happening behind closed doors." 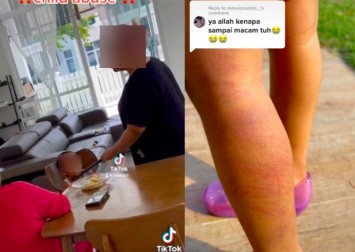 This is not the first time Stomp contributors have encountered adults using excessive force on children in public.

Earlier in March this year, a woman was seen scolding and twisting a boy's ear at 313 @ Somerset for not knowing how to tie his shoelaces.

A reader lodged a police report after watching videos of the incident on Stomp and police said investigations were ongoing.

In 2018, a man was spotted slapping a young girl while she knelt down at the carpark of IKEA Tampines. The incident, first reported by Stomp, sparked public outrage as well as investigations by the authorities.

The Ministry of Social and Family Development later said that it had taken appropriate steps to ensure the safety of the child and referred the case to a Child Protection Specialist Centre.