After a fire broke out in a fifth-storey flat, a woman, desperate to escape, climbed out of the kitchen window.

Slowly lowering herself onto a narrow ledge, she steadied herself with both hands and squatted there, waiting for help to arrive.

About 20 minutes later, firemen from the Singapore Civil Defence Force (SCDF) arrived and rescued her.

The drama unfolded at Block 158, Yung Loh Road, in Jurong West on Sunday at about 7.45pm.

Chinese-language newspaper Shin Min Daily News reported yesterday that a witness, Madam Xing, 54, saw the woman, who looked to be in her 30s, climbing out of the window.

Lianhe Wanbao reported she appeared to be calm while she waited for help.

The SCDF said yesterday that the fire involved the contents of the living room. It was extinguished by firefighters using a water jet.

The New Paper understands that the woman, a tenant living in the unit, was one of them.

The cause of the fire is under investigation, said the SCDF.

Later, at about 11pm, a 34-year-old man was arrested by the police at the block for disorderly behaviour. 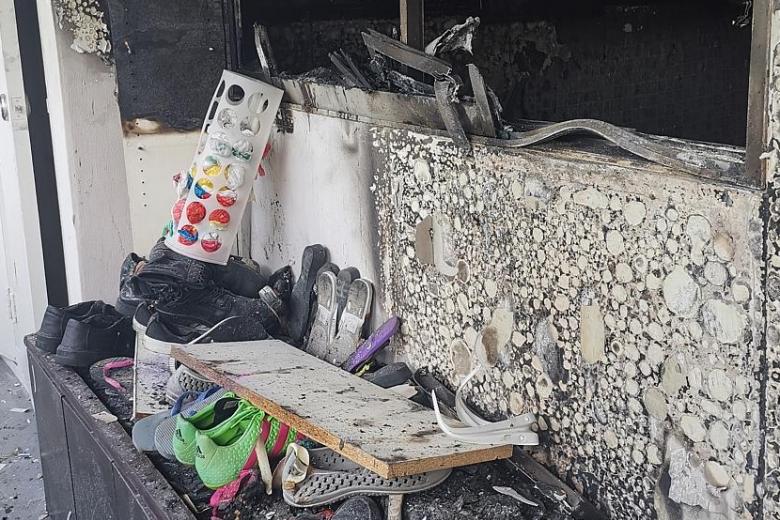 The flat was covered with soot after the blaze. PHOTO: The New Paper

According to Shin Min, the man had a confrontation with a cleaner.

He had also allegedly exchanged punches with another man before the police were alerted, Shin Min reported.

Investigations are ongoing, said the police.

When TNP arrived at the scene yesterday at about 1pm, almost 18 hours after the fire, the marble flooring in a unit above the damaged flat still felt warm to the touch.

The flat owner, who wanted to be known only as Madam Jega, said her flat was covered with soot after the blaze.

A neighbour had alerted her to the fire, said Madam Jega, 40, an administrative clerk, who was not home. She said she rushed home but when she arrived at 8.30pm, she was told to remain on the ground floor with her neighbours who had been evacuated from their flats.

Madam Jega said she had to take a day off from work just to clean her flat. "I have been cleaning my flat since 9am. The smoke last night was really thick and my flat is so dusty. Even my curtains, which were white, turned black," she said.

A 34-year-old man, who wanted to be known only as Mr Chan, told TNP that the evacuation area was chaotic.

He said: "I came home around 8.45pm from a day out and already there was a commotion happening on the ground floor. Children were screaming, it was so noisy.

"I only managed to go up to my flat around an hour later but the smell of smoke was still so strong."