SINGAPORE - A woman was taken to hospital after a car crashed into an eatery at Pickering Street on Thursday morning (Sept 13).

In response to queries, the police said that they were alerted to the accident at 9.42am.

The 53-year-old woman was conscious when taken to Singapore General Hospital, it added.

The Straits Times understands that the woman was a passenger in the car that had crashed into Five Square, a bar located at the Great Eastern Centre.

She suffered from minor injuries.

In a video posted on Facebook, what appears to be a black Toyota mounts the kerb before crashing into the glass facade of the bar.

Update: 53 year old lady passenger was hurt and sent to hospital conscious. Driver was not hurt. Wishing lady a speedy...

Passers-by can be seen rushing to help the vehicle's driver and passenger. 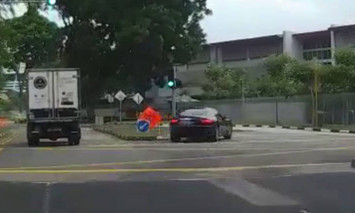 ST understands that there is no suspicion of drink driving and that the driver had lost control of the vehicle.

Five Square said on its Facebook page a couple of hours after the accident that operations at the eatery were not affected. "We had a small accident this morning but thank God no one was hurt...it is business as usual," it said.