SINGAPORE - A woman who was trapped under a car in an accident in Punggol earlier this month has lost her left foot and undergone multiple surgical operations to save her remaining foot.

Madam Alice Hee, who is in her 50s, was on her way to service at the Church of the Transfiguration with her husband and daughter on Feb 3 when the accident happened.

They were waiting to cross the road at Punggol Central near the church when a car slammed into the family tailfirst, pinning Madam Hee to the ground. Her left foot was severed immediately and her right foot was crushed under the car. Her husband and daughter suffered bruises and other minor injuries.

Madam Hee, whose occupation is not known, has had a total of four operations for her feet and is still recovering in Khoo Teck Puat Hospital. The most recent operation was done last Wednesday (Feb 13), Father Joachim Chang, parish priest of the Church of the Transfiguration, told The Straits Times last Friday (Feb 15). 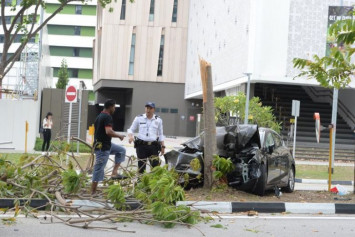 Despite the harrowing fortnight, Madam Hee is determined to continue fighting and responding positively to family support, said Father Joachim.

Madam Hee and her family declined to speak to the media.

Father Joachim, who has been counselling the family and praying for them at the hospital every day since the incident, said: "On the third or fourth day, she was able to smile. She is realistic and clear about her loss. She never wallowed in self-pity or isolated herself.

"Alice only cried when she saw the stitches on her daughter's lip and bruises on her legs."

Father Joachim added: "Recently, Alice told me that when she is discharged and gets better, she wants to renew her marriage vows with her husband. I thought that was sweet. In the midst of everything, she could feel the love from her husband and daughter."

"Her husband told me her 'phantom foot', which is now gone, still sends pain signals to her brain. And her remaining foot, which was crushed, gives her great pain," Ms Sun wrote in a Facebook post last Thursday night.

"I see metal apparatus on her bed, on the floor beside her. They looked cold, hard and awkward. I could not help but wince. You could feel the pain in that hospital room. It was on her face, in the air, in our hearts.

"I pray and pray that she will get well and be able to walk again."

Ms Sun, who is Senior Parliamentary Secretary for Home Affairs and National Development, added that the authorities are reviewing penalties for irresponsible driving, and they will be seeking feedback from the public on criminal penalties.

The 63-year-old driver of the car has been arrested for causing hurt by negligent act, and police investigations are still ongoing.