Woman unhappy her boyfriend made her take the MRT, treated her to Haidilao

One man's trash is another man's treasure, or in this case, it's the other way around.

A woman's anonymous complaint about her boyfriend giving her a Louis Vuitton wallet recently went viral. Guess what, she's back again.

Despite well-meaning advice from netizens the previous time, she said she had tried her best not to compare her boyfriend with her sister's but "what happened today really made [her] cannot take it."

Her follow-up confession, posted onto NUSWhisper's Facebook page yesterday (June 21), detailed much of her displeasure towards her beau. The couple had finally met up following a two-month-long separation due to the circuit breaker.

For starters, rather than chauffeur her in a Mercedes Benz like her sister's boyfriend did, the woman's partner met her at an MRT station to take the train to their destination, which left her feeling disgusted.

"Public transport is for poor people," she wrote. "I'm still trying to wash the stench of the MRT off myself."

To add fuel to fire, her sister had gone shopping at the luxury stores in Changi Jewel while her boyfriend 'disgraced' her by bringing her to shop at Chinatown, despite him doing so out of concern that indoor malls might be crowded. 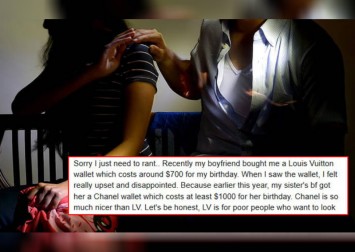 The straw that broke the camel's back was dinner. The two had managed to make a reservation at Haidilao and enjoyed a meal that cost them $50 each.

She fumed: "I have to say, Haidilao is like LV wallets, are for poor people who want to look rich."

In comparison, her sister had enjoyed a candlelight dinner at a three-star Michelin French restaurant that cost 10 times more.

Unlike her previous post, which had several netizens offering advice on how to improve her perspective, the comment section this time 'round was filled with scathing comments calling her out on her self entitlement.

Some others, on the other hand, were content to sit back and enjoy her "stories".