Woman warned after tending to plants on 10th-storey ledge

When an Ang Mo Kio resident looked out of his window last week, he was shocked.

On the 10th storey of Block 207 Ang Mo Kio Avenue 1, he saw a woman on a ledge outside a window attending to potted plants.

It was raining then, whichcould have made the ledge slippery.

But Miss Florence Leow, 65, thought nothing of it and continued for at least another 30 minutes. 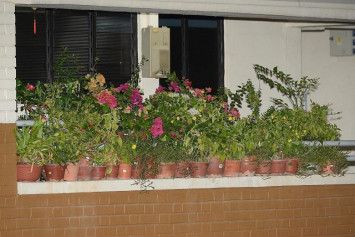 Perturbed, the man, who lives in a block facing hers, submitted photos and a video to citizen journalism website Stomp.

The Ang Mo Kio Town Council was quick to react.

Miss Leow, who is single and lives with her 91-year-old wheelchair-bound mother, told The New Paper that officials visited her flat last Thursday and removed 24 potted plants from the ledge.

The former kitchen helper said she was frustrated when she found out that the plants had to go.

She added: "I put them out there so they will get direct sunlight, and so the area outside won't be congested and obstruct people."

She said she had been climbing out of the window of her four-room flat to tend to the plants for about five years. 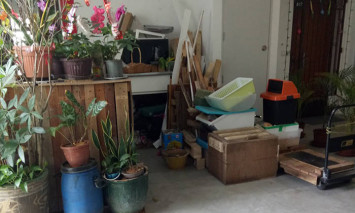 Miss Leow, who has been living there for more than 40 years, said: "To me it is safe as the ledge is wide, and I don't go near the edge."

The plants serve as a reminder of her late father, who died of a stroke five years ago at the age of 93.

She said: "He used to keep plants around our flat.

"I grow plants in memory of my father, and it makes me happy."

Residents of the block TNP spoke to felt her actions were unsafe.

Ms Ramy Ann Macabeo, who lives in a 10th-storey unit at the same block, felt Miss Leow was endangering herself. 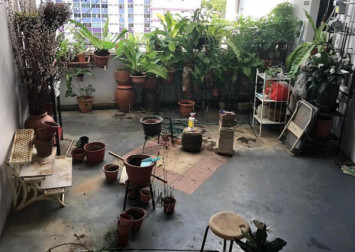 The 40-year-old domestic helper said: "One little mistake and she could fall down."

Another resident who lives in a ninth-storey unit at the same block and wanted to be known only as Mr Lim, said: "The issue is not so much killer litter, but rather her own safety."

In a statement to TNP, an Ang Mo Kio Town Council spokesman said: "Potted plants or any items are not allowed on this type of ledge.

"When we were alerted to this, we visited the resident and have since removed all potted plants on that ledge. We have also issued a final warning to the resident."