Work on Changi Airport Terminal 5 to restart; terminal will be ready to operate around the mid-2030s

Construction on Terminal 5 should start in about two to three years, said Transport Minister S Iswaran.

SINGAPORE - Singapore will restart work on Changi Airport Terminal 5 after a two-year pause, to build up its future capacity as the aviation industry recovers faster than expected from the Covid-19 pandemic.

Transport Minister S Iswaran on Tuesday (May 17) said construction should start in about two to three years and T5 will be ready to operate around the mid 2030s, in time for the anticipated increase in passenger traffic then.

The Government had paused the project in May 2020 to review its design as the pandemic decimated air travel and cast doubt on growth projections.

"Given the current and projected recovery in air travel demand, we have a renewed impetus to secure our infrastructural capacity for growth," said Mr Iswaran in a speech at the inaugural Changi Aviation Summit.

T5's design has been updated to become more modular and flexible, and it will be further refined, he added.

The two-day aviation conference, held at Sands Expo & Convention Centre, has gathered more than 300 aviation leaders to discuss the future of the sector.

Although air traffic in the Asia-Pacific region continues to lag behind Europe, America and Africa, signs in the first quarter of the year have been encouraging.

The number of passengers at Changi Airport crossed 40 per cent of pre-pandemic levels in April, nearing the Government's target of 50 per cent by year end. 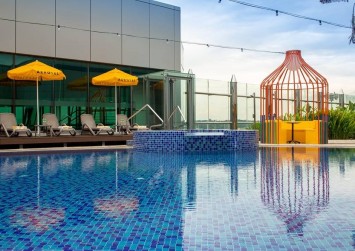 Recovery in the Asia-Pacific is expected to gain momentum over the coming months, Mr Iswaran said, with countries like Singapore, Malaysia, Thailand, Vietnam and South Korea reopening borders to all fully vaccinated travellers from April.

"Many airports had put in place expansion plans before the pandemic. These plans would now have to be revisited to safely, seamlessly, and sustainably support a return to pre-pandemic rates of growth in air travel," he said.

Plans for T5 were put on hold in May 2020 with the pandemic then in its fifth month. It was to handle up to 50 million passengers a year in its initial phase, and cover a land area equivalent to about 667 football fields.

This, along with Terminal 2's upgrading works, would have increased Changi Airport's total passenger handling capacity by about 65 per cent to around 140 million passengers a year.

T2's operations continue to be suspended, but the terminal will reopen in phases later in 2022.

This article was first published in The Straits Times. Permision required for reproduction.