SINGAPORE - Workers' Party chairman Sylvia Lim on Thursday (June 4) questioned the Government's decision to task NTUC with the administration of a government support scheme, saying this could have implications for accountability.

She said the Self-Employed Person Income Relief Scheme (Sirs) involves the use of public funds and Singapore's past reserves, and asked why there was a need to outsource the handling of applications and appeals to the National Trades Union Congress (NTUC).

"From a governance perspective, why was there a need to outsource the administration of Sirs appeals to NTUC in the first place? Was this done due to a lack of manpower or other reasons?

"Will this set a precedent for the Government to outsource its schemes to external parties to manage. What does this mean for government accountability?" she added during the debate on the Fortitude Budget.

Responding to the Aljunied GRC MP, labour chief Ng Chee Meng said NTUC got involved with Sirs when the Government made the request because it cares and also has the capability to help.

He said the fate of the self-employed, including taxi drivers, has always been a concern for the labour movement, which has given feedback to the Government about the issues they face.

Citing that NTUC had been helping taxi drivers since January and February when it noticed their income had dropped by 50 per cent or more, Mr Ng said he felt NTUC could augment the Government's efforts to get help to taxi drivers and freelancers as quickly as possible.

He added that tripartism is a strength and Singapore would be better off if businesses, workers and NTUC all come together to fight Covid-19 as a team.

"I gladly informed MOF (Ministry of Finance) that NTUC will take up this role, not because we want to be at the centre of things, but because we thought we have the capability to do our part as a tripartite partner," he said.

Under Sirs, those who qualify for the scheme will automatically receive three quarterly cash payouts of $3,000 - in May, July and October - to help them tide over their loss of income as a result of the coronavirus epidemic.

The Government had said that the Ministry of Manpower (MOM) oversees the scheme, and NTUC helps to administer applications and appeals for those who do not automatically qualify. 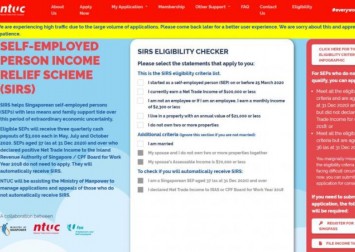 But Ms Lim said that based on the cases she had seen that involve her residents, NTUC is fronting all communications and appeals "while the role of MOM is not visible".

She also asked how NTUC decides on the appeals, and what criteria it uses for allowing or rejecting them.

Citing how some of her residents had been given partial support after appealing, and how others were rejected outright, she said: "Suffice to say these disparate outcomes have caused frustration and feelings of arbitrariness and unfairness."

To this, Mr Ng said the labour movement works within the framework given by MOM, adding that Manpower Minister Josephine Teo will be elaborating on the framework.

He also acknowledged that NTUC could have done some things better in its administering of Sirs, adding that it would "draw those lessons when the time comes" as the focus now should be on helping as many workers as possible.