SINGAPORE - In the biggest single haul in the world in recent years, the authorities on Wednesday (April 3) seized 12.9 tonnes of pangolin scales worth $52.3 million from a container at Pasir Panjang Export Inspection Station.

The scales originated from Nigeria and were bound for Vietnam. They were found packed in 230 bags among packets of frozen beef, and declared to contain "frozen beef".

Along with the pangolin scales, 177kg of cut up and carved elephant ivory worth $120,000 were also seized during the inspection.

Singapore Customs and the National Parks Board (NParks), which staged the joint operation that led to the haul, said the scales are likely from 17,000 pangolins, taking into account the weight of the various species. 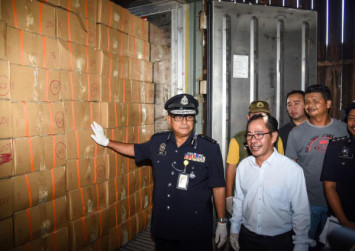 The previous biggest haul on record was in China in 2017, where nearly 12 tonnes of scales were seized.

NParks said it intercepted shipping of pangolin scales in Singapore in 2015 and 2016 as well.

The pangolin is believed to be the world's most trafficked animal.

Its scales are in high demand in Asia for use in traditional Chinese medicine, despite there being no medical benefit from their use.

Its meat is also considered a delicacy in some countries.

Singapore is a signatory of the Convention on International Trade in Endangered Species of Wild Fauna and Flora (Cites).

Under local laws - the Endangered Species (Import & Export) Act - the penalty for the illegal import, export and re-export of wildlife is a fine of up to $500,000 and may include two years' imprisonment.