WP's Terence Tan and He Ting Ru: 'When you walk the Opposition path, nobody will marry you, so we have to marry each other'

They started off as good friends, but Workers' Party (WP) members Terence Tan and He Ting Ru took their relationship a step further after he confessed his feelings for her.

The couple tied the knot in 2016 and have two young children.

In an interview with Yahoo! Singapore published on Wednesday (July 8), He shared more about how her relationship with Tan began (it started when they were party colleagues), and touched on what would happen if their kids chose to vote for the People's Action Party (PAP).

On who made the first move, the 37-year-old shared: "I think suddenly he just sent me a message, 'Actually, I really like you' and I think I was a bit [gives shocked expression], so I guess that was the first move?"

Tan, 48, joked, "I actually said 'I really like you', as in your mind, but I think she may have misinterpreted."

In a separate party interview that was shared by He on Facebook today, Tan quipped on why they got together: "When you walk the Opposition path, nobody will marry you, so we have to marry each other."

Tan shared that he asked He to marry him during the 2015 election campaign where they stood in the WP team contesting Marine Parade GRC. He is contesting in the Sengkang GRC this year, while Tan is standing in East Coast GRC.

And as to why He agreed to marry him, Tan joked: "I caught her at the weakest point when I asked her to marry me....In the exhaustion of the general election in 2015."

Said He: "I remember being sat in the car, and I remember he turned to me and said, 'so, shall we get married, and I just went [shocked look]."

We’ve gone on an incredible journey together, as party colleagues, as a couple, and now as a family. These are the...

The pair had shared during WP's virtual press conference last month that the decision to stand for election as a married couple was not taken lightly, especially since they had two young kids.

There were "many, many concerns" from loved ones, He shared.

Tan, who addresses his wife as "Ru", praised He for her intellect and said she was the better politician between the two of them.

"I respect her perspectives, very much," said Tan, who is a managing director at a hotel group, on top of practising law, while He is head of legal at a listed company.

When asked whether the couple hopes their children will grow up to support WP, Tan shared that "politics is not supporting a football team, in my mind".

Echoing her husband's sentiments, He added that "it's not about supporting it no matter what", but to have the ability to "think for themselves".

"I think I would have done my job if my children can actually really assess independently and critically whether or not a particular path, whether to go into politics or not, and whatever party to support, however they want to vote.

"As long as we give them the right tools to be able to make that decision in a very considered, in a very critical way," said He.

"Just because Mama and Papa run for the Workers' Party, it doesn't mean that we expect them to do it," she emphasised. 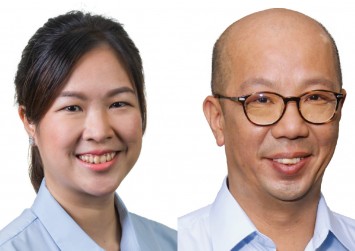 On the topic of whether they'd be okay if their kids joined the PAP, Tan hesitated before answering: "It would depend if I actually thought they'd made a rotten decision, but that's a little way down the road."

And they'd prefer if no comparisons are made between them and Singapore politics' OG power couple — founding father Lee Kuan Yew and wife Kwa Geok Choo.

"Good grief, after you asked me that question, all my hair flew off," joked Tan when asked for his thoughts on whether they're the greatest couple in politics since Mr and Mrs Lee.

"We are not great at all, please," he stressed. "We are just a couple who share the same political cause."

"It leads to less disagreement over a dinner table, that's for sure," but "(we're) hardly a power couple," concluded Tan.