SINGAPORE - The young are sometimes dismissed as the "strawberry generation" but Chief Commando Officer, Colonel Kenny Tay, does not share this view.

In fact, when talking about the training he has observed, he says the young soldiers under his charge wear heavier body armour, walk longer distances and carry weapons with higher firepower than their counterparts in the past.

They also complete back-to-back missions with none falling out.

"So how can I say they are the strawberry generation? It dawned upon me that with the correct purpose instilled in them, I think you can get the commitment to defend from them.

"And the fact that our training is tough draws them closer together, so that they will fight for one another. So in that way I don't think it's fair to label them as the strawberry generation. Actually they have my respect."

Col Tay, who is also commander of the Singapore Armed Forces (SAF) Special Operations Task Force, was speaking with reporters on Monday ahead of the commando formation's 50th anniversary parade on Wednesday (Dec 4).

He said that the younger generation have had to give up more when they enlist in the military.

When he was young, he lived in a shophouse, with a folding bed. "Anything more that I owned beyond my shoes and clothes can be contained within one shoe box," said the 47-year-old. 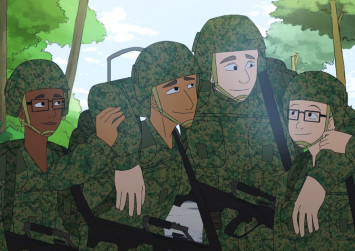 When he entered the army in 1990, he had a mattress and a metal cupboard, which, although small, was more than what he had before.

His two children today, 16 and 13, have creature comforts, such as being connected to the Internet all the time, and their own game consoles and computers.

"When the young enlist in the army today, I think the change is quite great for them, it's not easy for them to adapt. So we walk with them on this journey along the way."

Famed for their red berets - the near universal symbol of an elite airborne trooper - the commandos are trained to undertake special operations such as raids and reconnaissance deep in enemy territory . To do so, they can operate on land, in the air and in water.

The commando unit was formed as the Singapore Armed Forces Regular Battalion on Dec 1, 1969, with a pioneer batch of 30 men.

The effort to establish the unit was spearheaded by then Defence Minister Goh Keng Swee, who recognised the need for an elite force specialising in unconventional warfare.

Reflecting on the progress made by the unit since its founding, Col Tay said that one of the events that shaped it was the Laju ferry incident of 1974.

In that incident, armed gunmen attacked the Shell refinery on Pulau Bukom and escaped on the ferry Laju that was at the Bukom jetty.

A 13-man group, including a team of commandos, was formed to trade places with the hostages and guarantee safe passage for the four hijackers out of Singapore. 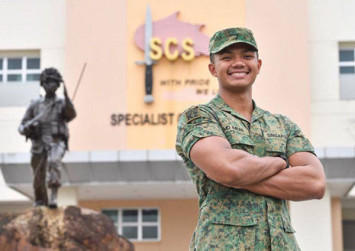 The group was headed by then director of Security and Intelligence Division at the Ministry of Defence, Mr S R Nathan.

"Several of our commandos together with then commanding officer Clarence Tan had offered themselves with the late president S R Nathan as collateral so that the hostage-taker will free the hostages. They saw to that - that the terrorists get free passage out of Singapore.

"That shaped our resolve to make sure that this does not happen to us again. That's when we raised the anti-terrorism team, later named as the special operations force in 1984," Col Tay said.

Col Tay was commander of the Officer Cadet School, the Commando Training Institute, and the Special Operations Force before assuming his current role in May last year.

He said that he had spoken with some of those involved with the Laju incident, and that "it still (ached) them in the heart" that those who had committed terrorist acts in Singapore had secured safe passage out.

"So today, I think we are better transformed, equipped. But I think to be ready is beyond what you are equipped with - it's really the mindset. Meaning that are we ready to adapt on the ground quickly, or can we foresee the threat earlier, and work with our inter-agency partners to have pre-emptive actions, rather than to allow the things to happen before we act."