(From left) Ser Lin Qian, Yu Mengyu and Izaac Quek with their awards.

SINGAPORE - After spending half her life in the sport, national paddler Yu Mengyu has called time on a career that saw her winning multiple medals at the Sea Games, Commonwealth Games and Asian Games.

Her last international competition was last August's Tokyo Olympics, where she won Singaporean hearts after fighting through an injury in the semi-final against China's eventual gold medallist Chen Meng, before losing to Japan's Mima Ito in the third-place play-off.

Despite hanging up her bat, Yu will continue to be involved in the fraternity as she has been appointed assistant coach for the STTA junior development squad for high potential athletes aged nine to 12 years old.

Calling it an important moment in her life, Yu said she is happy to work with the younger generation.

She added: "This is the right time for me to retire and I have always indicated my priority would be to continue to work with STTA who has been nurturing me all these years. 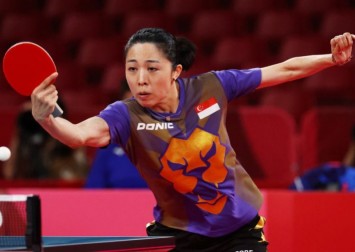 "Looking back at the past 16 years of my career, they were filled with touching moments and honours. From now on, I will open a new chapter of my life.

"I want to share my experiences with (the younger players) and groom these young athletes into champions of Singapore. I will keep adhering to the tenacious and indomitable sportsmanship which is crucial to success, and I hope to convey more positive energy to others and to society at large."

Born in Liaoning, China, Yu started playing the sport at the age of five and eventually became a provincial table tennis player. This led to STTA coach Chen Yong talent-spotting her and she accepted his offer as she was looking for opportunities to compete in international competitions.

She arrived here when she was 17 and first represented Singapore in 2006, before receiving her citizenship a year later. In 2010, she was part of the team who stunned China 3-1 to be crowned world champions.

But her journey was not all smooth-sailing as Yu had to battle multiple injuries over the years.

In 2014, she suffered from spinal and shoulder injuries which left her bedridden for a month. During the 2016 Rio Games, she had injections and platelet-rich plasma treatment, before undergoing surgery to fix a torn labrum in the shoulder later that year.

At the World Table Tennis Star Contender competition in Doha last year, her back injury flared up, leaving her unable to walk and she had to be escorted on a wheelchair to board her flight home.

The STTA awards on Tuesday night also saw Olympian Clarence Chew handed the Special Award (Senior Category) alongside men's coach Gao Ning, while youth paddler Izaac Quek — who became the boys' Under-15 world number one in April 2021 — was named the Youth Player of the Year.

Izaac was pleased to win the award and thanked the STTA for sending him to more overseas competitions towards the end of last year.

The 15-year-old, who hopes to compete in this year's Commonwealth Games and Asian Games, said: "Competing overseas really helped me with updating my skills and I learnt a lot about what I have to work on."

Lin Qian, 15, said the award will spur her on to train harder and added that she was grateful to have worked with Yu in the national team last year.

"When I injured my back some time ago, she gave me advice on how to heal and she comforted me," she said.

"She's definitely one of the local players I look up to and I was not only able to watch her, but also train beside her, so that motivated me and I learnt a lot from her."

Yu was also presented with a $29,752.96 cheque for her role in the 2010 world championships win. The STTA had raised funds for the five team members as the competition is not part of the Singapore National Olympic Council's Major Games Award Programme — an incentive scheme to reward medallists at major Games — with the funds disbursed on their retirement.

STTA president Ellen Lee paid tribute to the athletes and credited them and the coaches for their resilience and perseverance during the pandemic.

She said: "Tonight was a special night and the STTA awards were handed out to pay tribute to these athletes and their coaches for fighting harder than usual and we applauded them for coming this far. We are extremely proud of them."