Yucks! 'Mushroom' in bak chor mee from Jurong West stall turns out to be cockroach

Stomp contributor Anonymous was looking forward to having supper that he dabao-ed from a stall in Jurong West, but lost his appetite upon discovering a cockroach in his food.

Anonymous said he had purchased minced meat noodles at Block 501 Jurong West Street 51 on Sunday (Aug 4), at around 3.45am.

He told Stomp: "I bought a packet of dry bak chor mee from a famous fishball noodle stall which can be seen practically in every neighbourhood - Fei Siong.

"As I was taking the second bite, I wanted to pick out a mushroom from the corner of the packet.

"However, to my horror and disgust, what I had picked out from the packet was actually a cockroach with all its parts intact!

"I immediately puked out the noodles in my mouth."

According to Anonymous, he returned to stall, whose staff offered him a replacement packet.

"I declined the offer (who would take this offer up?!). He then offered to refund me. Of course, I chose the latter," added the Stomp contributor. 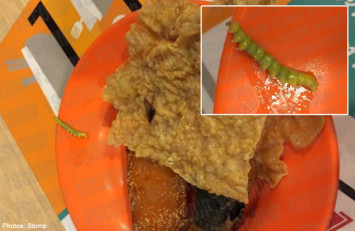 "Knowing that part of the standard procedures for bak chor mee is stirring the mushrooms, minced meat and noodles together, I wonder how much bacteria the cockroach had, how long the cockroach had been in the pot (if it was drowned), what kind of bacteria I had eaten, and how many other consumers had unknowingly been affected.

"I do not blame the stall assistant as I suspect that the cockroach had probably drowned itself in the pot of mushrooms.

"If you have noticed, Fei Siong and other fishball noodle stalls have a pot of mushrooms on a slow cooker for their bak chor mee.

"We, as consumers, will not know what else is in the pot of mushrooms.

"If the pot is properly and fully covered, other 'things' will not have a chance to climb into the pot.

"However, this step might sometimes be disregarded due to convenience's sake.

"I sincerely hope this serves as a reminder for all consumers and fishball noodle stall owners."

Fei Siong did not respond to Stomp's queries by press time.