2 dead, 4 injured in shooting at University of North Carolina, Charlotte

Family members and friends wait for their loved ones at a staging area after a shooting on the campus of University of North Carolina Charlotte in University City, Charlotte, on April 30, 2019.

CHARLOTTE, N.C. - Two people were killed and four others wounded, three critically, in a shooting on Tuesday at the University of North Carolina at Charlotte, officials said.

Police said one suspect, who some local media reported was a student at the school, was taken into custody following the rampage on the last day of classes for the academic year. Final exams were scheduled for next week.

Charlotte-Mecklenburg Police Department spokeswoman Sandy D'Elosua said the individual who was arrested was believed to have acted alone.

Television station WBTV in Charlotte reported that gunfire erupted about 5.45 pm (2145 GMT, 5.45am Singapore time) near the university's Kennedy Hall administrative building, and that one person had been arrested.

Susan Harden, a professor of education on campus since 2011 who also serves on the Mecklenburg County Board of Commissioners, expressed disbelief at the gun violence.

"This is a day at the end of the semester, when students are doing performances, presentations ... this is just the worst thing," said Harden said at the police staging area. "Our campus is so safe. So safe. I've never felt unsafe on our campus. I'm heartbroken."

She added, "I've got a student who's barricaded in her dorm right now."

Mecklenburg Emergency Management Services, an independent agency that handles emergency services for the county, confirmed on Twitter that two people were dead on the scene and that four others were taken to a hospital, two of them with life-threatening injuries.

"Absolutely heartbroken to learn of the two deaths at UNC-Charlotte. Details still unfolding, but prayers with those receiving medical care right now," US Representative Mark Walker, a Republican from North Carolina, said on Twitter.

WSOC-TV reported that the shooter was a student at the university.

A scenario that plays out over and over again in America: Students are ordered by police to put their hands up while evacuating the University of North Carolina Charlotte campus following a deadly shooting.

It is up to every American to ACT.

The suspect was not immediately identified by police, who set up a media staging area near the school.

"Run, Hide, Fight. Secure yourself immediately," the university said on Twitter shortly before 6 p.m. The school said later on its website the campus was on lockdown and that students and staff should "remain in a safe location." 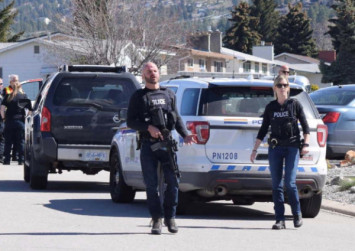 Video footage aired on local television and posted to social media showed scenes - increasingly familiar with the rise of school gun violence in the United States - of students evacuating campus buildings with their hands raised as police officers ran past them towards the scene of the shooting.

A spokeswoman for the Charlotte-Mecklenburg Police Department confirmed there had been an active shooter at the university but declined to give any further information.

According to its website, the University of North Carolina at Charlotte enrolls more than 26,500 students and employees 3,000 faculty and staff.

It breaks my heart to hear of more gunshots and bloodshed, this time at UNC Charlotte. North Carolina has always been a special place for me. Sending love and strength to the people of that great state tonight.

The deadliest mass shooting on a campus of higher education in the United States took place at Virginia Tech University in Blacksburg, Virginia, on April 16, 2007, when a South Korean student killed 32 people in a shooting rampage, before killing himself.