Nigerians Oladayo Opeyemi Awolola (left), 34, and Gbolahan Ayobami Awolola, 37, were each charged with one count of abetting others to receive stolen property.

SINGAPORE - Two men were taken to court on Tuesday (May 14) over their alleged roles in transnational Internet love scams committed between 2017 and last year.

In a statement on Monday evening, the Singapore Police Force (SPF) said this was the first time that overseas-based suspects involved in the scams were arrested and sent to Singapore for prosecution.

Nigerians Oladayo Opeyemi Awolola, 34, and Gbolahan Ayobami Awolola, 37, were each charged with one count of abetting others to receive stolen property.

Court documents did not state if they are related to each other. 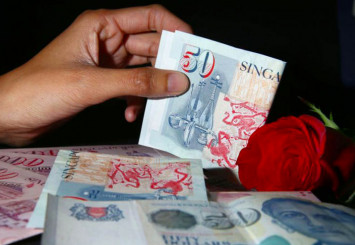 The pair, said to be part of an African syndicate, allegedly recruited two Singaporean women as money mules to receive criminal proceeds linked to the love scams.

The women allegedly received at least $85,700 from victims in Singapore before handing the cash to the syndicate members in Malaysia.

According to court documents, Oladayo Opeyemi Awolola allegedly engaged in a conspiracy with a woman identified as Suhaili Suparjo.

On Jan 18 last year, Ms Suhaili is said to have received $46,500 from one Peng Guie, and she had reason to believe that the money was stolen property. Court documents did not reveal Ms Suhaili's details.

Malaysian police arrested the two men in Kuala Lumpur on April 16 and they were brought to Singapore on Monday.

The SPF said there were 660 reported cases of cross-border Internet love scams last year where victims in Singapore were cheated of at least $27.5 million.

CAD director David Chew said this case is testament to the strong bonds between the SPF and RMP in the fight against crime.

He added: "This joint investigation shows our common resolve to send a strong deterrent message to criminals who are minded to prey on our citizens from the safety of national boundaries - that we can and will work with our foreign counterparts to identify, arrest and prosecute them to the fullest extent of the law.

"I am grateful to Director CCID, Datuk Pahlawan Mazalan Mansor, for his strong commitment and support in fighting transnational scams with us."

The two Nigerians are now remanded at Central Police Division and will be back in court on May 21.

Those convicted of abetting others to receive stolen property can be jailed for up to five years and fined.