Police move the lorry container where bodies were discovered, in Grays, Essex, Britain on October 23, 2019.

Two members of an alleged people-smuggling gang stood trial on Wednesday accused of being responsible for the deaths of 39 Vietnamese men, women and boys found suffocated in a stifling, airtight shipping container near London last year.

The victims, nine of whom were teenagers and two aged just 15, were discovered last October in a container at the back of a truck on an industrial estate in Grays, about 32km (20 miles) east of the British capital – a shocking incident that shone a light on global people smuggling.

Prosecutor William Emlyn Jones said the dead had been sealed inside a refrigeration unit, which was not turned on, in pitch black for at least 12 hours as the temperature rose to an unbearable 38.5 degrees celsius (101 degrees fahrenheit).

“What it must have been like inside that truck does not bear thinking about,” he said. “In short, they suffocated. There were no survivors.”

He said an unsent text message on the phone of one dead woman, Pham Thi Ngoc Oanh, 28, read: “Maybe going to die in the container, can’t breathe any more, dear.”

An Irish haulage boss, Ronan Hughes, 41, and Maurice Robinson, 26, from Northern Ireland, the driver of the truck, have already pleaded guilty to manslaughter.

On Wednesday, four other men accused of being part of the people-smuggling ring went on trial at London’s Old Bailey court.

Nica admitted that offence earlier on Wednesday, but denies any involvement in the fatal incident.

The Vietnamese migrants’ journey began in northern Europe on Oct 22 when the container was driven by Harrison to the Belgian port of Zeebrugge where it was loaded onto a cargo ship for England, Emlyn Jones said. 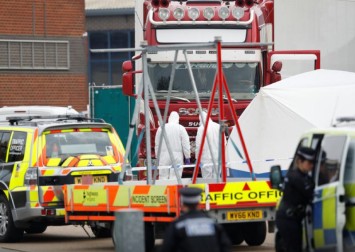 Shortly after midnight on Oct 23 at the English port of Purfleet, it was picked up by Robinson. He stopped almost immediately after being sent a message by his boss which said: “Give them air quickly, but don’t let them out”.

“What he found must haunt him still,” Emlyn Jones told the court. “For the 39 men and women inside, that trailer had become their tomb.”

The prosecutor said there were huge sums to be made from people smuggling, with people paying upwards of £10,000 (S$17,000) to cross the English Channel in the back of a truck.

He said the gang had successfully brought in truckloads of migrants previously, with Nica organising their dispersal and Calota one of their drivers. In May 2018, Harrison was stopped at Coquelles in northern France with 18 Vietnamese nationals hidden in his truck. He was given a fine, but never paid it.

On this occasion, however, Emlyn Jones said something “went dreadfully wrong”. Truck driver Kennedy, who was not involved in the fatal trip, texted a friend on the morning the bodies were found, saying: “Must have been too many and run out of air”.

Most of the 39 victims – 28 men, eight women and three boys aged between 15 and 44 – were from Nghe An and Ha Tinh provinces in north-central Vietnam, where poor job prospects and other factors spur migration.

Last month, a court in Vietnam sentenced four Vietnamese people to between 2.5 and 7.5 years in prison for their role in the deaths. Police said the defendants had arranged for one of the women to travel illegally to France and then to Britain for US$22,000 (S$29,000).

The trial at London’s Central Court is expected to last about six weeks.