4 US policemen fired after death of unarmed black man

Protesters gather at the scene where George Floyd, an unarmed black man, was pinned down by a police officer kneeling on his neck before later dying in hospital in Minneapolis, Minnesota, US May 26, 2020.

MINNEAPOLIS - Four Minneapolis police officers were fired on Tuesday over the death of an unarmed black man seen in a video lying face down in the street, gasping for air and groaning, "I can't breathe," while a white officer knelt on his neck for several minutes.

Hours after the officers' dismissals were announced, thousands of protesters filled the streets around the scene of Monday evening's deadly incident in a boisterous but peaceful rally. Many in the crowd wore facial coverings to protect against the spread of the coronavirus.

But the gathering took an unruly turn around dusk as police in riot gear fired tear gas and non-lethal bean-bag rounds into the crowds while protesters hurled water bottles and other projectiles, the Minneapolis Star-Tribune reported.

Local news footage showed some demonstrators vandalising the outside of a police precinct station and a squad car. The unrest appeared to have dissipated after dark as rain fell. 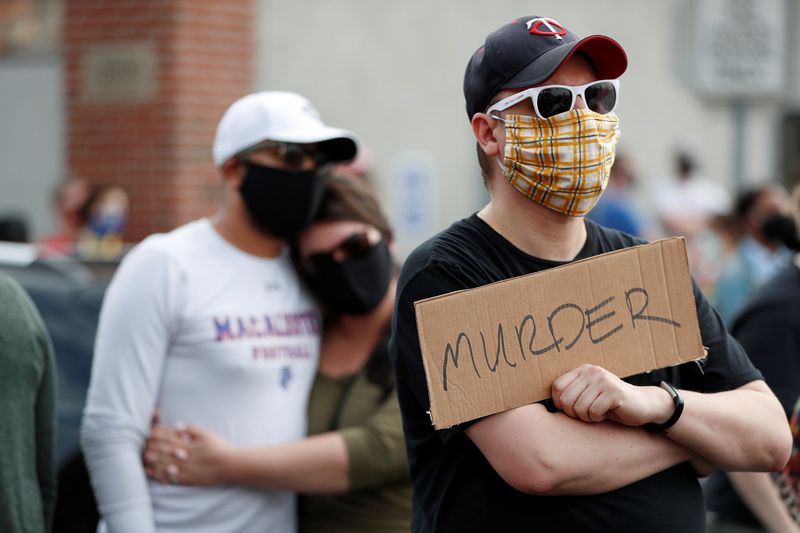 Protestors gather at the scene where George Floyd, an unarmed black man, was pinned down by a police officer kneeling on his neck before later dying in hospital in Minneapolis, Minnesota, US, May 26, 2020.    PHOTO: Reuters

The day began with Minneapolis police chief Medaria Arradondo telling reporters that the Federal Bureau of Investigation had opened an inquiry at his request into the fatal arrest caught on video the night before.

Mayor Jacob Frey said at the same news briefing that regardless of the investigation's outcome, it was clear the death of the man in custody, later identified as George Floyd, was unjustified, and that race was a factor.

"Being black in America should not be a death sentence," the mayor said. "For five minutes we watched as a white police officer pressed his knee into the neck of a black man. For five minutes. When you hear someone calling for help, you are supposed to help."

The mayor later announced the termination of four officers on Twitter, saying, "This is the right call."

The case was eerily reminiscent of the 2014 killing of Eric Garner, an unarmed black man in New York City, who died after being put in a police chokehold and telling the officers, "I can't breathe."

The officers involved in Monday's encounter were responding to a report of a forgery in progress, and found a man fitting the suspect's description, Floyd, aged in his 40s, in a car, according to a police department account.

After Floyd got out of the car, the department said, there was a physical altercation between the officers and Floyd. Floyd was handcuffed, and he appeared to be in medical distress, according to police. 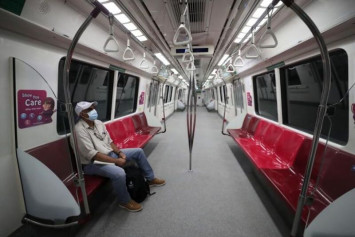 Cell phone footage taken by an onlooker does not show what precipitated the confrontation. It opens with Floyd lying beside the rear wheel of a vehicle, with a white officer pinning him to the street by pressing a knee into Floyd's neck.

Floyd can be heard repeatedly moaning and gasping while he pleads, "Please, I can't breathe, please, man," as bystanders gather around, growing increasingly agitated and shouting at police to let him up. After several minutes, Floyd gradually grows quiet and ceases to move.

An ambulance took the suspect to the hospital, where he died a short time later, police said. No weapons were involved, and no officers were hurt in the incident, according to police.

In the case of Garner, he was placed in a banned chokehold by a white police officer trying to arrest him for illegally selling loose cigarettes on the street.

Garner's dying words, "I can't breathe," became a rallying cry for the Black Lives Matter movement calling attention to a wave of African-Americans and other minorities who died at the hands of police using unjustified lethal force.

Attorney Benjamin Crump, retained by Floyd's family, said in a statement that officers' "abusive, excessive and inhumane use of force cost the life of a man who was being detained by the police for questioning about a non-violent charge."