Charlie Proctor, five, being carried by his mother Amber Schofield. Ms Schofield and her husband Ben Proctor were trying to raise £855,580 (S$1.53 million) for Charlie to get an organ transplant in the United States.

A young boy died last Friday (Nov 9) in England from a rare cancer, hours after apologising to his mother.

"Mummy, I'm so sorry for this," Charlie Proctor was quoted as saying by his mother Amber Schofield, 24, on a Facebook post hours before his death.

She wrote that he had said it in "the most quiet, panting voice". According to Ms Schofield, he was very agitated and kept shifting positions.

"He was sorry because he wanted to move again and he felt he had to apologise for that? So now I know he also feels like he's somewhat 'in the way'," wrote Ms Schofield. "My heart broke! No child should feel the emotions Charlie is feeling. No child! No parent should watch their child slowly go." 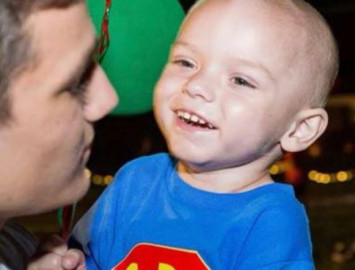 After he died, Ms Schofield wrote in another post: "He fell asleep peacefully cuddled in my arms with daddy's arms wrapped around us. Our hearts are aching.

"Charlie, you gave me (the) chance to be a mum. You have not only been our biggest inspiration, but you have been an inspiration to thousands of people all over the world... Now it's time to fly, I am so, so proud of you. You fought this so hard. My baby, I'm hurting so much. I will forever miss you baby bum. Sweet dreams my baby."

Charlie, five, had been battling hepatoblastoma, a rare liver cancer, since 2016, reported British news outlets such as the Daily Mail.

Ms Schofield and her husband Ben Proctor had been trying to raise £855,580 (S$1.53 million) for Charlie to get an organ transplant in the United States, and had reached almost half the target amount. Among the donors was US pop star Pink, who contributed £10,000, according to British newspaper The Sun.

#cancer #Children and Youth #US news