People wait in line outside a coronavirus disease (Covid-19) vaccination centre at Sydney Olympic Park in Sydney, Australia, on June 23, 2021

SYDNEY - At Bruce Willett's general practice near the locked-down Australian city of Brisbane, the phone is running hot as younger people book AstraZeneca Covid-19 vaccinations after the government suddenly changed policy to free up use of the drug.

Four months into a vaccine rollout sold as the way to reopen the country, the programme is mired in confusion and frustration after a run of changing medical advice, public political fighting and weak messaging, public health leaders said.

After an aggressive early response spared the country the high death counts seen around the world since early 2020, a patchwork inoculation strategy risks leaving vulnerable groups at risk, while others defy official health advice, casting a fog over re-opening hopes, they added.

While other economies rebound as their vaccination rates rise, Australia has given no timeline for reopening borders and stopping rolling lockdowns. Under 7 per cent of its 25 million people are fully vaccinated, according to most estimates.

"There's a lot of confusion about the various changes," said Mr Willett, the Queensland state chair of the Royal Australian College of General Practice.

"Phones are ringing off the hook. Lots of people under 40 just want to get it done, want to get vaccinated."

The change was a June 28 announcement that the federal government would indemnify physicians against any legal fallout from giving the AstraZeneca jab, once intended as the backbone of Australia's Covid vaccine plan but set to be sidelined amid reports of blood clot links, a rare side-effect.

The move, at the start of a fresh lockdown of most of the country, surprised doctors and ended the policy lockstep between the federal government and its official adviser, the Australian Technical Advisory Group on Immunisation (Atagi), which still recommends AstraZeneca only for over-60s.

For under-40s, though, it presented the first vaccination option since the imported Pfizer alternative was restricted to over-40s due to global supply shortages.

Since then, 2,616 Australians under 40 have booked AstraZeneca shots because "they would rather have the available vaccine than wait", the federal government's vaccine task force chief, Lieutenant-General John Frewen, told a morning television show. "All Australians have that right."

But Atagi co-chair Christopher Blythe told another network: "I do not believe that young people should be receiving AstraZeneca at this stage unless their circumstances are pressed for that."

The split made its way to public health leaders of several states who were not warned of the about-face and accused Canberra of overriding its own advisory body, fracturing a pandemic emergency body they all sit on. 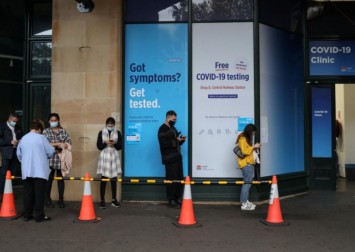 "We are not in a position that I need to ask young, fit, healthy people to put their health on the line getting a vaccine that could potentially significantly harm them," said Queensland chief health officer Jeannette Young on Wednesday (June 30).

The next morning, federal finance minister Simon Birmingham called Young's comments "extremist" and "shameful". Australia was "at the back of queue" for Pfizer because worse-affected countries took priority, he added.

Meanwhile, with four-fifths of the population locked down, the country which effectively stamped out Covid-19 by the start of the year has reverted to a routine of state leaders announcing new infection numbers in televised daily news conferences.

"This issue has just become so polluted by politics, by lack of trust, and an abandonment of any commitment to speak really openly with the community," said emeritus professor of public health Simon Chapman  at Sydney University.