Airport staff electrocuted to death beside oblivious co-worker in Yemen

The grisly death of an airport personnel at Yemen's Aden International Airport has been captured on a closed-circuit television camera.

The incident, which reportedly happened on July 14, saw airport staff Lofti Ibrahim al-Shamakh suffering an electric shock that led to his immediate death.

In the harrowing 30-second video, Lofti notices an electric fan was not facing the direction of airport guests. In an attempt to adjust it, he is electrocuted upon contact with the device and his body starts to convulse.

Lofti then tries gesticulating for help at a nearby colleague to no avail, with his face contorting in a frightening manner and darkening in colour before he eventually stops moving. 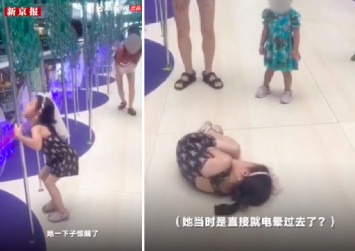 While this is going on, the aforementioned colleague calmly packs a bag and passes Lofti in oblivion, seemingly without a care. A number of people in the background do not seem to notice what is happening either.

A few seconds after the colleague leaves, another man dressed in a white shirt notices Lofti's unusual behaviour and checks on him in concern, disconnecting man from metal in the process which results in sparks emerging from the fan.

According to Arabian news portal Almasdar Online, Aden International Airport lacks a sophisticated air-conditioning system and the current one faces many breakdowns, so fans are used as an alternative.

After the video was released, internet users criticised the airport's handling of the affair and were riled by the cluelessness of the employee who did not rescue the victim.

A representative from the airport has since come out to apologise and promised to take responsibility for the accident, reported China Press.

#yemen #Accidents - Workplace #Accidents #Airports #In Case You Missed It