SANTIAGO, June 15 - Dozens of sea lions seeking to escape a pack of hunting killer whales in southern Chile on Saturday (June 12) surprised a fishing boat by trying to board it en masse instead.

Fisherman Antonio Zapata told Reuters that even though hunts by orcas are relatively common where he and his crew operate, he had never before in his four decades at sea experienced anything similar.

While sympathetic to the plight of the sea lions, whose predators circled metres away, thrashing their tails before moving in to grab at their prey, Zapata said his boat was already low in the water with a full haul of sardines.

WHAT WOULD YOU DO IF: Some sea lions tried to board your fishing boat to get away from lurking predators in Chile? https://t.co/mvRdOJZCZm pic.twitter.com/XJJu9jp4Qp

"They were trying to climb onboard and we had to spread ourselves around the vessel to try to get them off with sticks because the ones that were getting on were making us sink," he added.

"It was a dangerous situation because we couldn't get the sea lions to go away or make the killer whales leave either."

Mobile phone footage shows the water around the boat jammed with thrashing sea lions. Although the 10-man crew can be heard joking about their predicament, Zapata said they were genuinely concerned the boat would be damaged or they could end up in the water too. 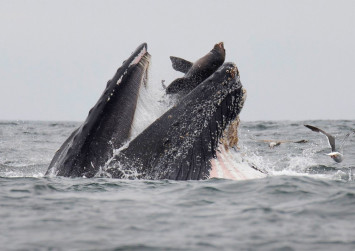 "There were so many sea lions around the hull that we couldn't move much - every time we did they got caught up in the propellers and I was worried they could break them altogether," he said.

They tried to approach a nearby island in the hope the sea lions could take refuge there instead, but the whales blocked them from nearing the shore.

The boat crept towards Talcahuano port, near the city of Concepcion in Bio Bio province. The whales drifted away, leaving the surviving sea lions to swim for cover.

"Some of the sea lions came with us into port, we couldn't get rid of them," Zapata said.