All migrant children under 5 will be reunified with parents by Thursday: US official

All migrant children under age 5 who were separated at the US-Mexico border will have been reunited with their parents by early Thursday morning if they were eligible, a Trump administration official said in a statement on Wednesday.

The American Civil Liberties Union, which sued the government over its separation policies, disputed that assertion.

"Their statement is vague at a minimum," said attorney Lee Gelernt, noting that a San Diego judge had set a deadline of Tuesday for reuniting those children. "We know they missed the deadline."

The government has said some children were not eligible for reunification because the parent was deported, had a criminal record or was otherwise unfit.

US Judge Dana Sabraw in San Diego had ordered the government to reunite the children under the age of 5 by Tuesday and all separated children by July 26.

On Thursday, the government will give Sabraw a progress report on the younger children and whether it expects to meet the deadline for the older group.

The government has said around 2,300 children were separated from their parents at the border under the Trump administration's "zero tolerance" policy on illegal immigration, which was abandoned in June after intense protests. 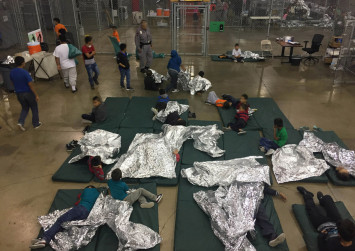 The ACLU's Gelernt said the government is not even close to reuniting all the children under 5 with their parents, including 12 adults who were deported without their children. He said they government has not told him how many children have been reunified with parents.

"I've asked the government for numbers and they should have told me by now," he told Reuters.

Since the government first came under pressure to ease its policy on separations weeks ago, it has shifted its estimates of the number of children it would reunite.

The latest figures released by the government were early on Tuesday, when officials said that four children under 5 had been reunited and at least 34 more would be with their parents by the end of the day.

Catholic Charities, which helped place some of the children in shelter facilities after their separation, held a news briefing in New York at which a handful of the reunited parents expressed relief after weeks of anxiety over the separations.

"I'm happy to finally be able to be with my child. I will never be separated from him, no matter what," said a tearful Javier, a 30-year-old from Honduras, who was reunited with his 4-year-old son after 55 days of detention. "Those were the worst days of my life. I never imagined that this would happen."

The organisation provided first names only.

The struggle to track and match parents with children under 5 suggests the government may have more difficulties in meeting a July 26 deadline for reuniting the remaining 2,000 older children with adults from whom they were separated.

"That is going to be a significant undertaking," Sabraw said on Tuesday of the next deadline.

US President Donald Trump took to Twitter on Wednesday to blame the Democratic Party, among others, for failing to fix what he has characterized as a broken immigration system.

"Judges run the system and illegals and traffickers know how it works. They are just using children!" he said.

One immigration advocate told Reuters she was still awaiting details on when officials would return two children younger than 5 to their parents. One parent was from Honduras and the other from El Salvador.

"Our clients still have not been reunified!" said Beth Krause, an attorney with Legal Aid Society's Immigrant Youth Project, in an email to Reuters. She said the government said one would be reunited sometime Wednesday.

If the government failed to reunite all the children under 5 with their parents by Thursday, Sabraw asked the ACLU to suggest penalties he could levy against the government.

Rights advocates have blamed the US government's poor technology for difficulties tracking children across multiple government agencies involved in their detention and care.

The government has said the delays stem from the time it takes to run background checks, confirm parentage and locate parents released from detention.