Aussie cops find body believed to be that of missing woman

CANBERRA, Australia - Police found a body yesterday they suspect is the only casualty among three people who became stranded in the arid central Australian Outback almost two weeks ago.

Police have yet to formally confirm the remains found south of the town of Alice Springs belong to Ms Claire Hockridge, 46. Police have not revealed details of the circumstances of the death, which will be investigated by a coroner, a police statement said.

Ms Hockridge, her partner Tamra McBeath-Riley, 52, and their companion Phu Tran, 40, were in a vehicle that became bogged in a dry riverbed during a sightseeing drive on Nov 19.

Ms McBeath-Riley, who had been driving and became lost, decided last Thursday to stay at a salty waterhole with the couple's staffordshire terrier while her friends tried to trek toward a highway, carrying water and planning to walk at night to avoid the desert heat, which came close to 40 deg C in recent days.

By that stage, they had spent nine nights in the open with biscuits, instant noodles, bottled water and cans of pre-mixed vodka to sustain them.

Ms McBeath-Riley and the dog were rescued by a search helicopter on Sunday after a cattle rancher alerted police to suspicious tire tracks, which led searchers to the abandoned pickup truck.

Mr Tran and Ms McBeath-Riley were treated at an Alice Springs hospital for dehydration and exposure. 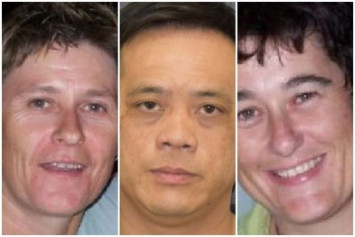 Mr Fogarty found Mr Tran at a water tank on his property where he had been drinking and cooling since Monday.

"He said he was coming with me," Mr Fogarty told The Australian newspaper. "He was pretty happy to see me."

The women had been showing local landmarks to Mr Tran, who was visiting from Adelaide.