Australia aims to 'live with virus' instead of eliminating it

SYDNEY - Australian authorities on Wednesday extended the Covid-19 lockdown in Melbourne for another three weeks, as they shift their focus to rapid vaccination drives and move away from a suppression strategy to bring cases down to zero.

Victorian Premier Daniel Andrews flagged a staggered easing of the tough restrictions once 70 per cent of the state's adult residents receive at least one dose, a milestone he hopes to reach at least by Sept 23, based on current vaccination rates.

"We have thrown everything at this, but it is now clear to us that we are not going to drive these numbers down, they are instead going to increase," Andrews told reporters in Melbourne, the state capital, after a lockdown for nearly a month failed to quell the outbreak. The lockdown was due to end on Thursday.

"We got to buy time to allow vaccinations to be undertaken all the while doing this very hard work, this very painful and difficult work, to keep a lid as much as we can on cases."

New local cases jumped to 120 in Victoria from 76 a day earlier. Of the new cases, 100 have spent time in the community while infectious.

Neighbouring New South Wales state, home to Sydney, on Wednesday brought forward its target date to fully vaccinate 70per cent of people above 16 to the middle of next month from the initial target of the end of October, as outbreaks spurred a surge in inoculation.

"No matter where you live, life will be much, much better, much freer, as long as you're vaccinated at 70per cent," Berejiklian told reporters. So far 37per cent are fully vaccinated in the state, while 67per cent have had at least one dose, slightly higher than the national numbers but well below most comparable nations.

A total of 1,116 new cases were detected in New South Wales, down from 1,164 a day earlier. NSW reported four new deaths, taking the total number of deaths in the latest outbreak to 100.

"Australia can live with this virus," he said in Canberra.

Australia is trying to get a handle on the third wave of infections that has locked down more than half of its 25 million population. Sydney and Melbourne, its largest cities, and capital Canberra are in weeks-long strict stay-at-home orders.

Despite the recent flare-ups, it has managed to keep its coronavirus numbers relatively low, with just over 55,000 cases and 1,012 deaths.

Among the Group of 20 big economies, Australia was the last to record 1,000 Covid-19 deaths, a grim but modest marker by global standards reached this week.

While Australian authorities had been able to douse past outbreaks through lockdowns, the highly infectious Delta variant has forced the country's two biggest states to plan for a reopening even as infections rise. 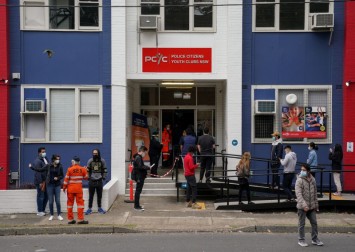 "Your window of opportunity at the start to eliminate it is so much smaller and basically once you're passed that, Delta decides its destiny," Moy said.

The federal government is pressing the states and territories to stick to a national reopening plan once vaccination rates reach 70 per cent-80 per cent although some virus-free states said they may delay given the rapidly rising Sydney cases.

"Stick to the plan ... a plan that allows businesses to reopen and plan for their own future ... a plan that takes Australia forward to living safely with the virus," Frydenberg said.