Australia looking to restrict return of citizens amid coronavirus outbreak

Fire Services Victoria members write each other's names on their hazmat suits as they prepare to enter a public housing tower in Melbourne, Australia July 8, 2020.

SYDNEY - Australia will likely slow down the return of its citizens from abroad, Prime Minister Scott Morrison said on Wednesday, as it grapples with a fresh outbreak of the coronavirus that has led it to isolate its second most populous state.

The border between Victoria and New South Wales, the busiest in the country, was closed overnight and around 4.9 million residents in the Victorian capital of Melbourne will return to partial lockdown at midnight following a spike in Covid-19 cases in the city.

“The rest of the country knows that the sacrifice that you’re going through right now is not just for you and your own family, but it’s for the broader Australian community,” Morrison said during a televised media conference.

With the Victoria shutdown putting pressure on other states, Morrison said he would take a proposal on Friday to the national cabinet created to deal with the pandemic, seeking to slow down the return of Australian citizens and permanent residents by reducing the number of repatriation flights.

The two groups have been the only arrivals allowed since Australia closed its international border in March.

Neighbouring New Zealand has already taken that step, announcing on Tuesday that its national airline will not take new inbound bookings for three weeks to reduce the burden on overflowing quarantine facilities.

There has been growing public concern in Australia about security lapses that have led to returnees spreading the virus, despite undertaking quarantine on arrival. Victoria has begun an inquiry into how the state went from the brink of eradicating the virus to soaring infection numbers. 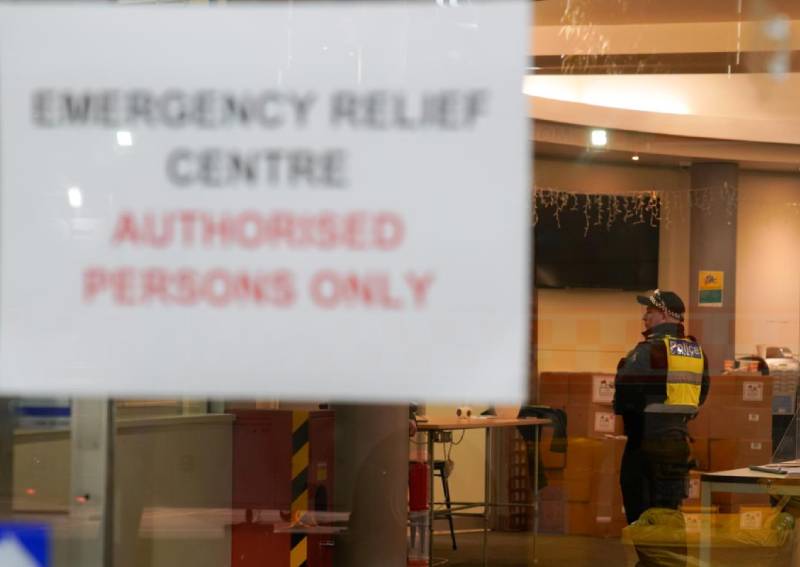 Police officers meet inside an emergency centre outside a public housing tower, locked down in response to an outbreak of the coronavirus disease, in Melbourne, Australia, July 8, 2020. PHOTO: Reuters

The state reported 134 new infections in the 24 hours to Wednesday morning, down from the previous day’s record 191 but well over the low single digit daily increases of the other states and territories.

Of the new cases, 75 were occupants of nine public housing towers that were earlier this week placed under the country’s strictest lockdown so far. Around 3,000 residents have been banned from leaving the buildings, which are under police guard, for five days. All residents are being tested for Covid-19.

At the border with NSW, cars banked up on both sides as police checkpoints caused delays of more than an hour for drivers. The state line is heavily trafficked by daily commuters who live and work on either side.

“I got a permit but with all the checks, my commute across was heavily delayed,” Amanda Cohn, who crosses the border from her home in NSW each day to reach the Victorian hospital where she works, told Reuters by telephone. “Plenty of others need to get across and they don’t have a permit.”

Authorities had hastily set up a system to issue travel permits for a select group, mostly commuters in border towns, but a website created to dispense passes crashed soon after its launch on Tuesday evening with officials saying more than 44,000 people applied.

Officials reassured that regular commuters could instead show residential and employment documentation.

Victoria’s only other internal border, with South Australia, has been closed since mid-March.

In Melbourne, renewed lockdown measures will kick in at midnight for at least six weeks, closing down cafes, bars, restaurants and gyms, and confining residents to their homes except for essential business.

The Australian economy will take an economic hit of up to A$1 billion (S$968 million) per week from the border closure and Melbourne lockdown, federal treasurer Josh Frydenberg said.

Nationwide, Australia has reported about 9,000 Covid-19 cases and 106 deaths from the virus, a level that remains low compared to other nations.