Sydney - Accident investigators hope this week to raise a seaplane which crashed into an Australian river with the death of six people, including a high-profile British chief executive.

Richard Cousins, the boss of catering giant Compass, his sons Edward and William, fiancee Emma Bowden and her daughter Heather Bowden-Page were killed in the accident on the Hawkesbury River north of Sydney on New Year's Eve.

Nat Nagy, executive director of transport safety for the Australian Transport Safety Bureau, said the investigation would cover the plane's maintenance record as well as its components and any recordings of the flight.

"So that could involve avionics or instruments that are attached to the aeroplane, but also things like mobile phones, iPads, GoPros that we will be able to recover data from," Nagy said, announcing the intention to recover the DHC-2 Beaver Seaplane this week.

A preliminary report is expected in a month. 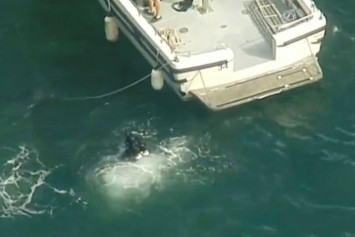 The sightseeing aircraft, which was heading to Rose Bay in Sydney Harbour, made a sharp turn before plummeting straight into the water in the suburb of Cowan 50 kilometres (31 miles) north of Sydney.

Witnesses on a nearby houseboat told national broadcaster ABC how they dived into the river, which was covered with aviation fuel, in an attempted rescue.

Three men repeatedly plunged in to try and open the plane's doors as it sank. Unsuccessful, they tied the aircraft's tail to their dinghy but were unable to move it.

"Dead set, they could have died," said Will McGovern of his three friends.

"The whole time I was freaking out that this fuel was going to spark. This plane was moving fast, it was going down fast - they could have got sucked in.

"The families of these poor people, they need to know people were there risking their lives trying to help their family members. There was someone there trying to do something." The Britons had watched England in the fourth Ashes Test against Australia at the Melbourne Cricket Ground, and were set to watch the final Test in Sydney this week, Sydney's Daily Telegraph reported.

"It's very sad to hear of the loss of any cricket fan around the world especially when it's so close to home," the Barmy Army's Chris Millard told the Telegraph.

"Our thoughts are with their families." The Barmy Army were set to hold a minute's silence before two upcoming fan matches against Australian cricket supporters, the newspaper added.

Former England captain Michael Vaughan tweeted Tuesday: "Saddened to hear of the passing away of Richard Cousins and some family members in Sydney ... Great man who loved the game of cricket ... Thoughts to all his family ... #RIP."