Australian Prime Minister Scott Morrison looks on during a news conference with French President Emmanuel Macron in front of the Elysee Palace in Paris, France, on June 15, 2021.

SYDNEY - Australia's Prime Minister Scott Morrison on Tuesday (Feb 8) apologised to a political staffer who said she was raped in a ministerial office, after a review found half of parliamentary staff had experienced harassment, bullying or sexual assault.

The apology marked a rocky start to an election year for Morrison and came as anti-vaccination protesters gathered outside parliament and his conservative party faced ructions overa religious freedom bill.

An election must be held by May, leaving few parliament sitting days before the federal budget is delivered in March, which is likely to trigger the start of the official campaign.

As parliament sat for the first time in 2022 on Tuesday, a statement was read by the speaker apologising for "an unacceptable history of workplace bullying, sexual harassment and sexual assault in parliamentary workplaces".

Brittany Higgins, who last year went public with details of her alleged rape that sparked the review, watched from the public gallery as all party leaders pledged change.

"We are sorry, I am sorry to Miss Higgins for the terrible things that took place here," said Morrison, adding that a place that should have been safe "turned out to be a nightmare".

Morrison's personal integrity has been under attack with damaging leaks, including by Higgins, of historical text messages from state and Coalition partner leaders, including some labelling him a "liar".

Polls show Morrison has also been marked down by voters over his handling of the coronavirus pandemic.

On Monday, the government announced Australia would open its borders to international travel on Feb 21, after two years, in a boost for business and tourism.

The defence force was also sent in to assist aged care homes struggling with staff shortages amid Covid. 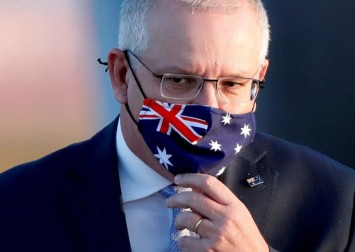 A Guardian Essential poll on Tuesday morning showed a lift in voters who thought Morrison's handling of the pandemic was good, from 35 per cent two weeks ago to 40 per cent, but his Coalition still trails the Opposition Labor party.

Contentious changes to religious discrimination laws that seek to balance religious freedom with gay and lesbian protections are among the few bills to be debated before the election.

At issue is whether the government has gone far enough in protecting students at faith-based schools from discrimination based on gender identity, with some moderate members of Morrison's Liberal party threatening to vote against the bill.

Former Olympian swimmer Ian Thorpe was among those lobbying against the bill at parliament on Tuesday because he said it didn't protect transgender students who were the most marginalised group in the country. "It becomes state-sanctioned discrimination," he said.

Morrison told reporters many people had migrated to Australia to escape faith-based discrimination, and he had pledged before the last election to pass laws to ensure their freedom.

"For so many Australians their faith and their religion is their culture," he said.