Brigitte Bierlein will now be tasked with forming a cabinet after the previous government collapsed spectacularly over the so-called "Ibiza-gate" corruption scandal.

"I will seek to win Austrians' trust," Bierlein said alongside Van der Bellen in a televised statement Thursday, saying she would hold talks with political parties and civil society organisations in the coming days.

She said that Clemens Jablons, a previous president of the Supreme Administrative Court, was "ready to take up the posts of vice-chancellor and justice minister".

She added that she would put forward diplomat Alexander Schallenberg for the post of foreign minister. 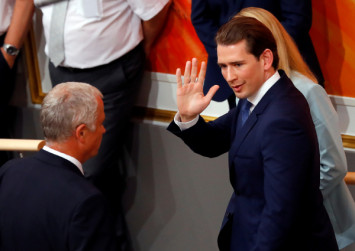 "If this is surprising for you, it is for me as well," Bierlein told journalists gathered for the statement.

Bierlein, 69, has been president of the constitutional court since last year and previously held several other prominent positions as a judge and prosecutor.

The appointment comes after Sebastian Kurz became the first chancellor in Austrian history to be thrown out of office by a no-confidence vote of MPs on Monday.

Opposition MPs brought the motion as they said Kurz had to take responsibility for the scandal which brought down his government.

The crisis began with the publication of hidden-camera footage in which former Freedom Party (FPOe) leader and Vice-Chancellor Heinz-Christan Strache appeared to offer public contracts to a woman posing as a Russian investor in exchange for help in the 2017 parliamentary election campaign.

The video led Strache to resign and prompted Kurz to end his coalition with the FPOe and call snap elections.

Kurz's centre-right People's Party (OeVP) won an impressive 34.6 per cent of the vote in Sunday's European parliament elections and at the moment looks on course to easily re-emerge as Austria's largest party at the upcoming elections.