MOGO, Australia - When everyone else in the Australian town of Mogo fled the flames that tore through surrounding bushland, Chad Staples didn't consider abandoning his family.

By family, he means giraffes, rhinos, lions and gorillas among the 200 residents of Mogo Zoo, which he and 15 staff battled to defend last week from raging bushfires that ravaged dozens of homes and vehicles across the tiny tourist town on New Year's Eve.

When they knew the fires were coming, Staples and his team made a plan to keep flames at bay and save the 65 acre private zoo and its 40 species, including shifting some primates into their own living quarters.

"There's no way we would leave the animals behind. These are family - not things," said Staples.

The survival of the zoo's six zebras, two rhinos, six giraffes, four gorillas, three tigers and six lions, among others, is among the few positive stories to come out of a devastating fire season that has so far killed 26 people. 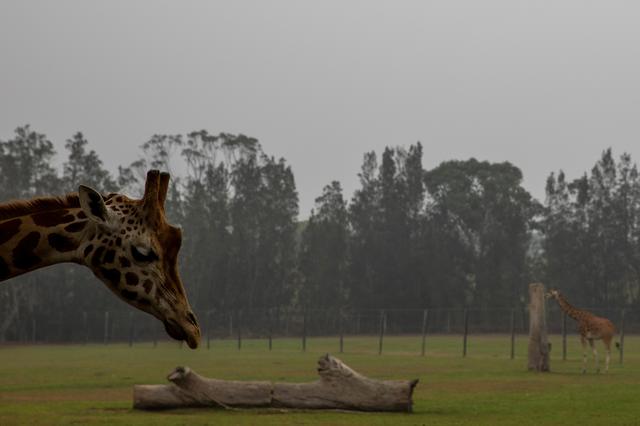 At Mogo Zoo, staff spent New Year's Eve dousing the grounds with hundreds of thousands of litres of water as the fires approached, shifting quickly as winds changed.

Flaming trees collapsed close to animal enclosures as the fire jumped over a stream on two sides of the grounds. The sky turned red and Mogo was in darkness by noon, Staples said.?

A local fire service official stopped by at the zoo and told them no one would be able to come rescue them.

"They were busting a gut to save everyone else," said Staples, who described conditions as "apocalyptic".

"I've never felt heat like that or seen fires that look like that and I never want to see that again."

After the fires, the zoo arranged police escorts to get trucks through roadblocks to make urgent deliveries of hay, vegetables and water to keep the animals alive, he said.

The zoo animals were among the lucky ones. University of Sydney ecologists on Wednesday doubled their estimate of the number of animals killed or injured in the fires to 1 billion.

The 170-year-old town of Mogo was badly hit by some of the fiercest fires seen yet this season, with homes, cars and buses reduced to shells, mangled metal and collapsed rubble. 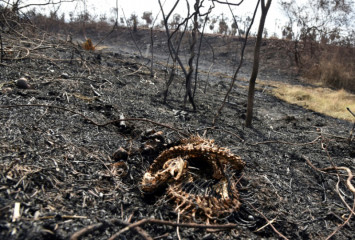 Gayle Smith, 68, who runs an organic nursery, described her astonishment that her wooden home had survived having defended it from multiple small fires before eventually fleeing.

"It was mind-bending. I felt relief and disbelief seeing it was still here," she said.

Thousands of people have already been left homeless by the fires that have scorched through more than 10.3 million hectares  of land - an area the size of South Korea.

Staples said the zoo was saved because of the staff's good preparation. A big worry, he said, was losing power for electric fences around the enclosures.

"The last thing you want if you're a firefighter is a lion on the loose," he said.