British PM May signals she is ready to fight on

SHARM EL-SHEIKH, EGYPT - Theresa May signalled on Sunday (Feb 24) she wanted to press on as prime minister, saying there was still more to do to live up to her promise when she took office to make Britain work "for every one of us".

Mrs May told her governing Conservatives in December last year she would not lead the party into the next election, part of a message to ease concerns among her lawmakers before they mounted, and then lost, a no confidence vote against her.

But she has so far refused to give a date for her departure, and despite reports some of her ministers want her to step down after local elections in May, she said she wanted to pursue not only Brexit, but what she called her "domestic agenda".

"I was very clear in December with the Conservative Party as far as I am concerned ... my job is not only about delivering Brexit, actually there's a domestic agenda that I am delivering on," she told reporters before arriving in Egypt for a summit. 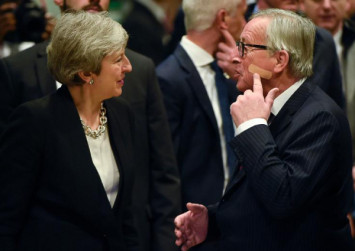 Mrs May is struggling to get her deal to leave the European Union (EU) through Britain's deeply divided parliament, and her handling of Brexit talks has been criticised by all sides, uniting both eurosceptics and EU supporters against her.

Last week, three Conservative lawmakers quit Mrs May's party over what they described as the government's "disastrous handling of Brexit", which, one said, had been hijacked by "the right-wing, the hard-line, anti-EU awkward squad".

Few expected Mrs May, who during two years of bruising talks with the EU has suffered defeats in parliament, rows over policy and the confidence vote, to have lasted so long, and many in her own party expect her to stand down well before the next election, which is scheduled to take place in 2022.

But she has so far proved her doubters wrong, and on the way to Egypt said there was still a way to go to secure Brexit. Even if the divorce deal is approved, then Britain will start talks with the EU about their future trading relationship.

"There's a second part of the negotiations in terms of the future economic partnership, the future security partnership,"she said. "We have set out a clear framework for that in the political declaration and that is the basis on which those negotiations would go forward."