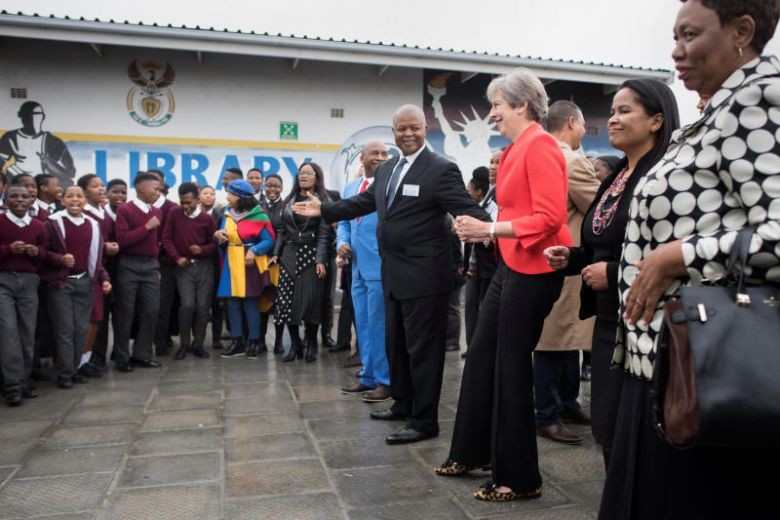 Britain's Prime Minister Theresa May and South African Minister of Basic Education Angie Motshekga dance with school children during a visit to the ID Mkhize Secondary School in Gugulethu near Cape Town, on Aug 28, 2018.
Reuters

The PM got into the groove in Cape Town on Tuesday when she was welcomed to South Africa by some dancing schoolchildren.

The 61-year-old joined in the fun with some shapes reminiscent of gangly former England footballer Peter Crouch's robot dance - before looking up, clocking the cameras and drastically reining it in.

The Daily Telegraph newspaper said it was "the exact moment where she loses the will to live" - the forthcoming avalanche of social media mockery appearing before her very eyes.

But before that, just for a few seconds, "we saw who Theresa May really was... just a woman, flapping about in front of some bewildered kids like she was being attacked by eels.

"It was without doubt the most human she has ever looked, which is an odd thing to say about a video that looks like a possessed shop mannequin being Tasered."

The Sun compared her to John Travolta with the headline "Mayin' Alive!" - but called her performance "toe-curling".

The Daily Mail said the "robotic nature of her game attempts" saw her moves dubbed the "Maybot" on social media.

Meanwhile May's dance made it onto the front page of The Guardian, which called it "an impression of a wobbly fridge".

Professional dancer James Jordan gave her performance low marks. "It was embarrassing to watch - like bad mum dancing," he told The Sun.

"But at least she gave it a go. You have to praise Theresa for trying. I'll give her two out of 10 for effort - one point for each leg."

Referring to a popular BBC celebrity ballroom dancing contest, even May admitted she had not set the dance world on fire.

"I think the chances of 'Strictly Come Dancing' coming calling are pretty minimal," she told Sky News television, adding: "Everybody was dancing. It was great excitement."

Dance choreographer Arlene Phillips was quoted as saying in the Daily Mail that she would "give her some advice on how to relax, swing her hips - but most of all, make her look comfortable."

The Times said the way "Twinkle Toes Theresa" had "pawed at the concrete" raised concerns that she "might have stood in something as she stepped out of her car".

In South Africa, The Citizen newspaper said May "put on a brave face" and "joined in with a bit of a Madiba-esque shuffle" in the style of former president Nelson Mandela.