People stand around candles in the grass next to a US flag during a vigil to pay tribute to the victims of a shooting in Thousand Oaks, California.

THOUSAND OAKS, California - Alicia Wagner says she moved her family six years ago from the affluent Los Angeles-area enclave of Pacific Palisades to the sleepier and more distant Thousand Oaks, in the Santa Monica Mountains, away from urban hustle and bustle.

"We wanted a quieter, more peaceful lifestyle," said Wagner 46, a photo archivist who shares a spacious, two-story home with her husband, Steve Vincent, 55, a Walt Disney Co executive, their five children and two large dogs in the Westlake Village community.

Thousand Oaks, known to locals as "T.O." and named for the abundance of trees that dot the sprawling city of 127,000 people in the foothills of the Conejo Valley, has long been touted as one of the lowest-crime municipalities of its size in America.

It was named the third-safest city in the United States this year by Niche, a real estate research firm that ranks communities by school quality, income, crime and other factors.

That reputation was shattered late Wednesday (Nov 7) night when a gunman identified by authorities as a Marine combat veteran opened fire in a crowded nightclub, the Borderline Bar and Grill, killing 12 people.

He was later found dead inside, apparently from a self-inflicted gunshot wound.

"This is not a place anyone would ever expect anything like this to ever happen," Wagner told Reuters.

That was echoed by Ari Alexenburg, 39, who was waiting for word on the fate of his friend and fellow security guard, who he said was believed to have been working at the Borderline at the time of the shooting.

"You're in the safest neighbourhood in America," Alexenburg said. "Nothing, I mean nothing, ever happens in T.O."

Located about 40 miles northwest of downtown Los Angeles, Thousand Oaks occupies about 55 square miles of rolling hills on the opposite side of the Santa Monica Mountains from Malibu, including more than 15,000 acres of publicly owned parks and open space. 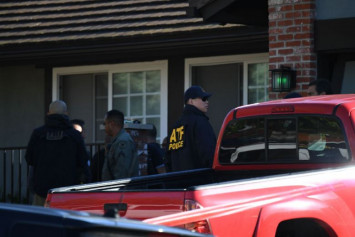 But the mountain and foothill landscapes surrounding the Conejo Valley offer plenty of space for hikers and outdoor enthusiasts, as well as scenic vistas that have served as backdrops for various Hollywood movies over the years.

Originally inhabited by the Chumash Native Americans who dwelled in the Conejo Valley, the area was first settled by the Spanish in the early 1800s, with pioneers migrating into the area throughout the 19th century.

The first post office in the area was built in 1875, and a small outpost there became a stop on the stagecoach route between Los Angeles and San Francisco, according to the city of Thousand Oaks' website.

Chicken ranches, dairy farms and apricot orchards that dotted the valley into the early 20th century gave way to greater development after the city was incorporated in the 1960s.

Wednesday night's bloodshed marked a tragic new chapter in the city's history that has upended any notion that its residents are somehow immune from senseless violence, City Councilman Rob McCoy said at a news conference.

"It can happen anywhere," he said. "This was just an awful event. The citizens of our community are devastated. We're heartbroken."