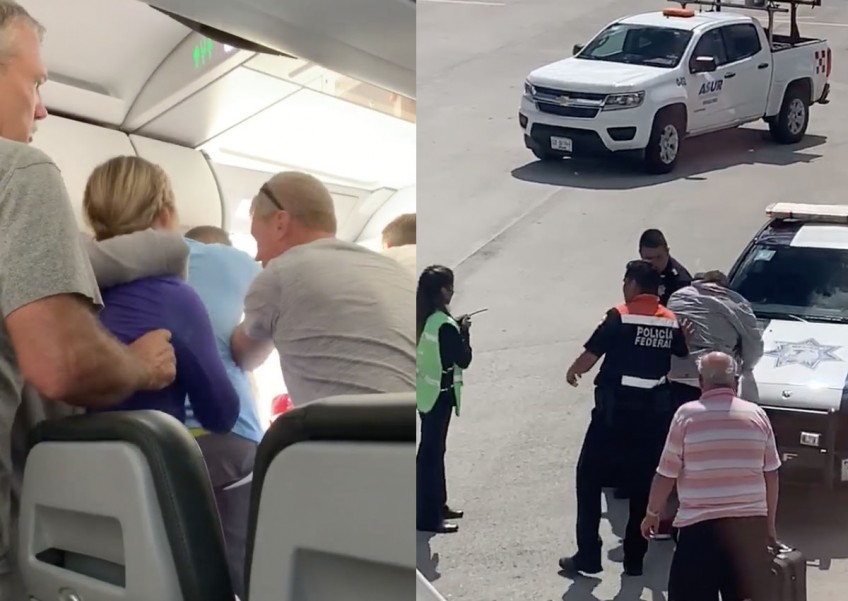 A passenger was one step away from injury or death after he forced open the emergency exit door of a plane as it was preparing to take off.

A series of videos captured by Facebook user Kathleen Ingham show a man forcing open the cabin door of the Frontier Airlines flight from Cancun, Mexico to St Louis, Missouri in a desperate attempt to remove himself from the flight. The incident happened on Monday, Oct 22.

According to the video's description, the man reportedly felt ill as the plane taxied on the runway and he began to bang on the cockpit door demanding that pilots let him out.

Even as cabin crew intervened, he pushed them away and turned his attention to the emergency exit door, forcing it open and deploying the aircraft's emergency slide in the process.

Fortunately, quick-witted passengers immediately got out from their seats and pinned him down to prevent him from causing serious injury to himself.

He could have been sucked into the still-running jet engine if he had stepped out of the plane, added Ingham in her account of the event.

According to Sin Chew Daily the passenger, identified as Tommy Gray, was quickly apprehended by the Mexican authorities and sent to the hospital for a medical evaluation. The flight was cancelled and other passengers were transferred to another flight.

Gray's family has since chalked up his peculiar behaviour to having one too many drinks before the flight, and a sustained head injury after being attacked in the hotel the night before.

Ingham took the opportunity to point out safety lapses in the plane and asked the airline to review how their cabin doors could be opened so easily.

Just last month, a passenger was arrested after trying to open the emergency door on an AirAsia plane mid-flight.

The first-time traveller was in urgent need to use the loo and tugged at the cabin doors sparking panic throughout the cabin. Earlier this year, a China woman also made the same mistake, deploying the emergency slide after she thought the door led to a lavatory.