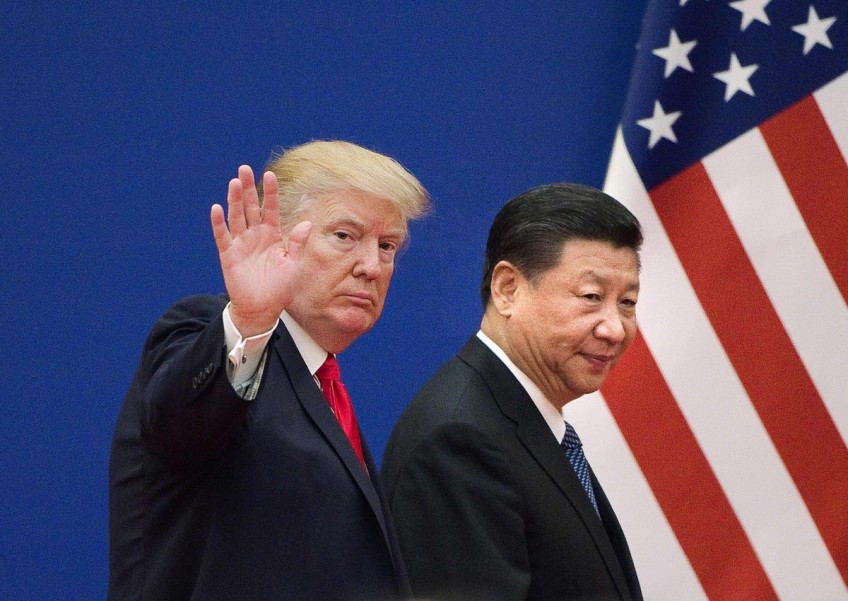 US President Donald Trump and China's President Xi Jinping leaving a business leaders event at the Great Hall of the People in Beijing, on Nov 9, 2017.
AFP

WASHINGTON - United States President Donald Trump and Chinese leader Xi Jinping will "probably" meet at a G-20 summit next month, a US official said on Sunday (Oct 14), as both sides seek answers for a badly strained relationship that a Chinese official called "very confusing".

"The presidents will probably meet at the G-20 in Buenos Aires," Trump economic adviser Larry Kudlow said on the Fox News Sunday programme.

But he added that trade talks with China - with each side imposing a mounting series of tariffs on the other, raising fears of a shock to the global economy - had so far been "unsatisfactory".

"The relationship has not been positive lately," Mr Kudlow said.

China's ambassador to the US, Mr Cui Tiankai, raised similar doubts about the relationship between the world's two largest economic powers.

Also appearing on Fox, he said China has grown frustrated in trade talks because of conflicting signals from the Trump administration. Mr Cui said other ambassadors in Washington shared his frustration.

Chinese officials have complained before about receiving mixed signals from Mr Trump's economic team. One Chinese official appealed in June to "our American interlocutors to be credible and consistent" while another called the US side "capricious".

The latest airing of grievances occurred at the end of a week that saw a sharp drop in the US stock market, which analysts blamed partly on uncertainties sparked by the trans-Pacific trade dispute.

At a World Bank/International Monetary Fund meeting last week in Bali, global finance chiefs warned that the US-China trade spat, coupled with rising US interest rates and tanking emerging-market currencies, could push the world to financial crisis. They added, however, that there was still time to avert such a disaster.

China's central bank Governor Yi Gang said the country will step up reforms and open up its economy further.

Mr Trump has levied billions of dollars in tariffs on Chinese imports as he presses Beijing to change restrictive trade practices that he says unfairly hurt American businesses and innovators.

His move comes at a time when the US economy has been growing robustly while Chinese growth has slowed, adding to the pressure on Beijing.

But some Americans - like soybean farmers whose product is being priced out of China's market by its retaliatory tariffs - are also suffering.

The differences between the two sides extend beyond trade, both Mr Cui and Mr Kudlow acknowledged.

Mr Cui complained about a recent incident in which a US navy ship, in a so-called "freedom of navigation" exercise, sailed close to a disputed island claimed by Beijing in the South China Sea, where China has steadily extended its presence.

"This is a very good example of American intervention into Chinese internal affairs," Mr Cui said, adding that US officials would not be pleased to see Chinese warships in the Gulf of Mexico.

Mr Kudlow said that relations have "not been positive lately, and we have to have reciprocity in all of these areas: trade, security, military issues. That's what is at stake".

Earlier this month, US Vice-President Mike Pence issued a long litany of complaints against China.

He accused Beijing of "predatory" trade practices, of military "aggression", of attacks on personal freedoms and religious minorities, and even of electoral interference aimed at unseating Mr Trump by running ads in American newspapers.

Mr Cui replied on Fox that Chinese media were "just learning from American media to use all these means to buy commercial pages from newspapers", adding: "This is a normal practice for all the media." But the ambassador also held out hope for the Buenos Aires meeting.

Two earlier encounters between the presidents, he said, had made it "clear that such top-level communication played a key role, irreplaceable role in guiding the relationship forward. And there is good mutual understanding and good working relationship between the two".