COLOMBO - A high-rise city the size of central London rising out of the ocean next to Sri Lanka's capital is laying down another marker for China's global infrastructure ambitions whose epic scope is sounding alarm bells in Asia and beyond.

When it is completed, Port City will effectively double Colombo's size and be part of a glimmering trio of new, Chinese-funded islands alongside a man-made archipelago off Malaysia and a planned futuristic metropolis adjoining Manila.

The projects have been linked to China's Belt and Road Initiative (BRI), a sweeping trillion-dollar infrastructure programme across Asia, Africa and Europe that is viewed with deep suspicion by countries like India and the United States, and has divided opinion within the European Union.

And in Sri Lanka, Malaysia and the Philippines, increasingly vocal concerns are being raised about the environmental impact of the island cities, a lack of transparency surrounding their funding and the possibility of a Chinese-sprung debt trap.

Read Also
Is Hong Kong's waterfront 'boring' and can city learn from Singapore? 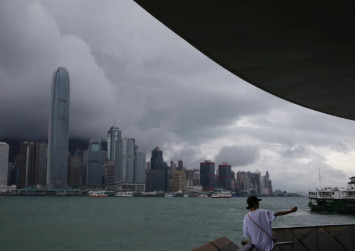 The island-building spree is "part of a big picture of China's rapidly expanding global influence done through connectivity", said Dr Wang Jiangyu, an associate professor at the National University of Singapore's law faculty.

Port City will serve as a base for China in South Asia as well as a "model project which would showcase what big change China could bring to the countries, especially the less developed ones, along the BRI," Dr Wang said.

Leaders from 37 countries will flock to Beijing this week for a BRI summit, hoping to grab a piece of the US$1 trillion (S$1.36 trillion) pie to improve their infrastructure.

Critics say the initiative comes with a heavy price, as it favours Chinese companies and exacerbates debt problems in some countries.

In Colombo, two-thirds of the 269ha artificial island located near a deep-sea container port will be given to the Chinese developer on a 99-year lease.

The land reclamation work ended in January and high-rises now need to be built, with the aim of creating a financial hub rivalling Dubai or Singapore.

The islands promise to bring much-needed development to poorer countries like Sri Lanka, whose capital is reeling from the deadly Easter Sunday (April 21) bombings.

But it comes with a "hidden debt trap", warned Mr Ranil Senanayake, a former adviser to the ministry of megapolis development, which oversees the project.

"Our sewage and garbage disposal systems are cracking at their seams. So how can we support a so-called world-class city?" Mr Senanayake told AFP.

"Either we have to borrow heavily to offer these services or it's going to place a heavy burden on the Sri Lankan taxpayers."

The interest rate for Chinese loans to Sri Lanka is about 6.5 per cent, double what other major lenders, India and Japan, charge, said Dr Dushni Weerakoon, an independent economist.

Sri Lanka already had to hand a 99-year lease to China for its Hambantota deep-sea port because it could not repay loans to Beijing for the US$1.4 billion project.

The lack of transparency in deals struck between local governments and developers remains a thorny issue on Belt and Road-related projects.

In Port City, representatives of the Chinese developer will be part of a "governing body" overlooking investment decisions linked to the artificial island, local media reported.

"The public has been left in the dark about this new governing body and it creates major concerns over the sovereignty and territorial integrity of the country," Mr Senanayake said.

Sri Lankan Economic Reforms Minister Harsha de Silva, who is involved in creating the governing body, could not be reached for comment.

In Malaysia, the four-island project will belong to the developer - a joint venture between Hong-Kong listed Country Garden and a local government-owned company, said Mr Ryan Khoo, a property consultant from Alpha Marketing specialising in southern Malaysia projects.

With two-thirds of units sold to mainland Chinese buyers well before the US$100 billion project is completed in 2035, Forest City became a lightning rod at growing Chinese influence in Malaysia during elections last year.

Country Garden said in a statement it has a diverse customer base from over 30 countries and the new government has "clarified that foreigners are allowed to purchase properties at Forest City".

"Helping Chinese people - and in turn, Chinese business opportunities - spread around the region and throughout the world is one of the more under-appreciated functions of the BRI," said Mr Will Doig, author of High-Speed Empire: Chinese Expansion And The Future Of Southeast Asia.

Building islands is "faster and cheaper" because it does not require relocating thousands of residents, said a former Country Garden employee.

But the projects have raised concerns about coastal erosion, the fate of fishermen and the effects on neighbouring cities.

In the Philippines, opponents of the proposed man-made island fear it could heighten flood risks and worsen congestion in neighbouring Manila.

In Colombo, Mr Hemantha Withanage, a lawyer who has sued the Chinese developer and the Sri Lankan government, claims the project was approved without a proper environmental impact assessment.

The project has also affected the livelihoods of 15,000 fishermen, and Mr Withanage said compensation offered to them has "disappeared" into the pockets of local officials.