Colin Kaepernick ads spark boycott calls, but Nike is seen as winning in the end

Protesters burned their Nike shoes, investors sold shares and some consumers demanded a boycott after the footwear and apparel maker launched an advertising campaign featuring Colin Kaepernick, the NFL quarterback who sparked a national controversy by kneeling during the national anthem.

But the brand recognition that comes with the campaign may be just what the company wanted, and marketing experts predicted it would ultimately succeed.

The ad revived a raging debate in the United States that started in 2016 when Kaepernick, then with the San Francisco 49ers, began kneeling to protest multiple police shootings of unarmed black men.

"This is right on the money for Nike. They stand for this irreverent, rebellious attitude. In this case, it's reinforcing the brand," said Erich Joachimsthaler, CEO of strategy consulting firm Vivaldi.

While some fans praised Kaepernick and other players who joined him in kneeling as patriotic dissenters, critics led by US President Donald Trump blasted the protesters as ungrateful and disrespectful.

Believe in something, even if it means sacrificing everything. #JustDoIt pic.twitter.com/SRWkMIDdaO

Trump called Nike's campaign "a terrible decision" in an interview with the Daily Caller published on Tuesday, but he also showed some respect for Kaepernick's right to speak out.

"As much as I disagree with the Colin Kaepernick endorsement, in another way - I mean, I wouldn't have done it. In another way, it is what this country is all about, that you have certain freedoms to do things that other people think you shouldn't do," Trump said.

The NFL, which gave in to pressure from Trump and ordered players not to kneel on the field during the anthem, nonetheless praised Kaepernick.

"The social justice issues that Colin and other professional athletes have raised deserve our attention and action," said Jocelyn Moore, the NFL's executive vice president of communications and public affairs.

In the immediate backlash against the campaign, announced on Monday, Nike shares fell nearly 4 per cent at one point on Tuesday and closed down 3.2 per cent. 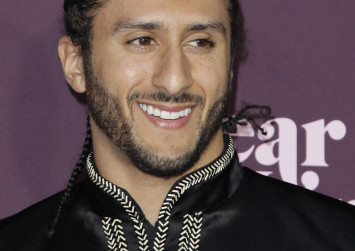 After his protests, Kaepernick could not find a job for the 2017 season and sued the National Football League, accusing owners of colluding to blackball him. He is still without a team.

Nike has sponsored Kaepernick since 2011 and said he will be one of several faces for a campaign marking the 30th anniversary of its "Just Do It" slogan.

The ad refers to Kaepernick's loss of NFL income with the quote: "Believe in something. Even if it means sacrificing everything."

Some who were offended by the choice posted social media pictures of Nike shoes they had set on fire or socks with the Nike swoosh cut out.

Twitter user Sean Clancy, or @sclancy79, posted a picture of a pair of Nike trainers on fire on Tuesday that was retweeted 20,000 times.Athletes including Serena Williams, LeBron James, Kevin Durant and Chris Paul showed support.

The controversy may have been a convenient excuse for some investors to sell an over-valued stock, Vivaldi's Joachimsthaler said.

Christopher Svezia, a footwear and apparel analyst at Wedbush Securities Inc., said Nike shares were trading at roughly 30 times next year's forecast earnings, compared with 24 per cent for rival Adidas.

"Nike more than anyone else really knows who their customer is," Svezia said, describing them as largely 14- to 22-year-old males. Nike sneakers are seen in a garbage bin in Oklahoma, U.S., September 3, 2018 in this still image from video obtained from social media. Photo: REUTERS

Matt Powell, a senior adviser with market research firm NPD Group, predicted the boycott would fizzle. "Old angry white guys are not a core demographic for Nike," he said.

Barry Lowenthal, CEO of The Media Kitchen, praised the campaign and said Nike has long proven successful in using celebrity endorsements to promote its brand, a precursor to what is known as influencer marking in the social media age.

"These kind of endorsement deals were the first version of influencer marketing. Of course they know it works. It's classic product placement," Lowenthal said.

Even former Iranian President Mahmoud Ahmadinejad weighed in, tweeting: "The #NFL season will start this week, unfortunately once again @Kaepernick7 is not on a NFL roster."