A spokesperson for British Airways apologised for the disruption and said ground transport was arranged to take passengers to their final destination.

LONDON - Severe crosswinds caused a British Airways plane to rock violently from side to side on approach to the tiny British territory of Gibraltar, terrifying passengers and forcing the pilots to abort the landing, the Washington Post and British media reported.

Video footage from inside the plane and from the ground showed the low-flying Airbus A320 violently tipping back and forth like a capsizing boat in high seas, stunning some observers who posted videos on YouTube.

BA Flight 492 on Monday (Feb 25) started like any other. It took off from London's Heathrow Airport at 8.25am local time, slated for a 2½-hour trip to Gibraltar International Airport, the Washington Post reported.

The twin-engine aircraft was about 3km west of the runway, about 110m above the Bay of Gibraltar, descending at about 200m a minute. Without warning, the aircraft tossed left, then right, at times dipping 30 degrees or more. 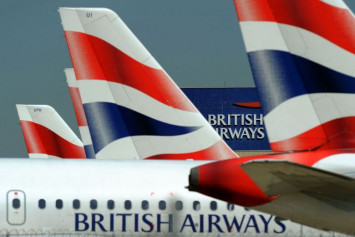 "Suddenly, we felt the plane drop and rock violently from side to side," recalled Ms Lisa Huxstep, a British passenger on board the flight.

Ms Huxstep was petrified as her fellow passengers and cabin crew went silent. But then it got worse.

"My husband and I looked at each other in panic as other passengers started to scream. I gripped his hand and prayed," the Washington Post quoted her as saying.

Ms Huxstep said the plane endured the rocking nine times in either direction before levelling out. That's when "the pilot thrusted the engines, and the rolling stopped", she said.

Flight data shows that the plane got as low as 90m - one football field - above the ground. Sixteen seconds after, the aircraft was clocked climbing at 110m feet a minute. The aircraft continued ascending as it passed the Rock of Gibraltar.

"We circled above the sea for five to eight minutes before it was announced we were being flown to Malaga instead, due to the strong winds," Ms Huxstep said. Flight 492 landed safely in Malaga, Spain.

A spokesperson for British Airways apologised for the disruption and said ground transport was arranged to take passengers to their final destination, adding: "Due to strong winds in the Gibraltar area, our pilots decided to land in Malaga as a precaution.

"The safety of our customers and crew is always our No. 1 priority," Britain's The Telegraph online quoted the airline as saying.

The Washington Post said the empty aircraft returned to London the same day with no mechanical issues reported.

The exact cause of the incident remains unclear.

The Washington Post said despite the clear air, gusty winds out of the east at 40kmh to 50kmh prevailed most of the day. If blowing perpendicular to the runway, these could cause crosswinds that would make landing difficult. But in this case, they were blowing along the length of the runway.

What might have happened is a process called Von Karman vortex shedding, The Post said. When a tall object protrudes into a layer of relative uniform wind flow, alternating vortices spin up, downwind of the object. These whirlpools are often invisible but occasionally can be seen on satellite images in the wake of isolated islands.

It is plausible that this happened on a much smaller scale south of the airport, The Post said. The Rock of Gibraltar is 426m tall and is an isolated feature. With Monday's wind speed and direction, it is possible that periodic eddies - perhaps 100 feet to 200 feet across, a wavelength perfect for tilting an airplane - formed continuously and propagated within a narrow strip downwind of the rock.

Another possibility was mountain waves, the Post said. The eastern slope - in this case the windward side - of the rock chain south of Gibraltar's airport serves as a ramp that artificially forces air upward. By the time it reaches the top, it is denser than the surrounding atmosphere. It sinks but then warms, rising again. These air pockets bubble up like a bobber in a pond. They are like the ripples that form behind a stone in a river, the Post said.

No official explanation has been provided.

"I don't want compensation," Ms Huxstep said. "I want an apology. I hope some lessons were learnt."