Drought-hit Australia had third-warmest year on record in 2018

The average temperature across Australia in 2018 was 1.14 deg C above the average for 1961 to 1990, making nine of the past 10 years hotter than average, the bureau said in its annual climate statement.

MELBOURNE - Australia had its third warmest year on record in 2018, a year marked by severe drought in large parts of the country and a longer than normal bushfire season, the Bureau of Meteorology said on Thursday (Jan 10).

Maximum temperatures across Australia were the second-warmest on record, at 1.55 deg C above average, just behind the hottest year in 2013.

The average temperature across Australia in 2018 was 1.14 deg C above the average for 1961 to 1990, making nine of the past 10 years hotter than average, the bureau said in its annual climate statement.

Read Also
2018 temperatures set to be among hottest on record: UN 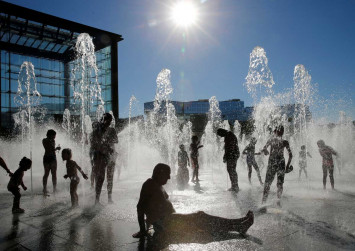 Annual rainfall was the seventh lowest on record over the south-eastern quarter of the country.

"It was a tough year for people dealing with the drought, and like the rest of the country, the bureau hopes 2019 will bring some rain relief for those being impacted by the dry conditions," the bureau's senior climatologist Lynette Bettio said in a statement.

Over the whole country average rainfall was 11 per cent below the average for 1961 to 1990, at 413mm, which the bureau said was due to natural variability as well as climate change.

"Warmer than average temperatures and a windy winter meant more evaporation, which led to a rapid and intense drying of the landscape," Dr Bettio said in a video released with the statement.

The bureau earlier predicted that the Australia's current summer, which runs from December through February, would be drier than average across the north and hotter than average for most of the country, with heatwaves likely in the south.