LONDON - A former member of Irish band Boyzone on Monday (March 26) told a court how he was abused by his "manipulative" ex-girlfriend accused of murdering her French nanny and burning the body afterwards.

Kouider, 35, and her 40-year-old partner Ouissem Medouni, are accused of the murder of Sophie Lionnet. All three are French.

"She would go from softly spoken French accent then she would flip, get very angry, very loud and just not care where we were," said Walton.

"She would just go crazy over something trivial." Lionnet was hired in January 2016 to look after two children. Her charred remains were discovered in the house's back garden on Sept 20 that year. 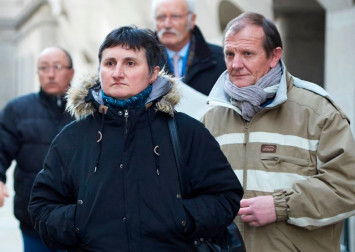 Prosecutors earlier told the court that the couple had subjected Lionnet to "a campaign of intimidation, torture and violence" which culminated in her death.

When Lionnet's remains were found in the garden, Medouni told the fire brigade he had burned a sheep.

Kouider said Lionnet had disappeared some days before.

Kouider alleged Walton had recruited Lionnet to spy on her in exchange for money and the promise of "fame".

Walton said the couple lived together for two years, but that Kouider had accused him of being a paedophile after he moved out and stopped paying rent.

"I was broken, emotionally broken but I loved her," he told court.

Kouider and Medouni have admitted perverting the course of justice by attempting to burn the body, but deny murder.