David Malpass, president of the World Bank Group, arrives for a meeting with Japan's Prime Minister Fumio Kishida (not in picture) at Kishida's official residence in Tokyo, Japan, on Sept 13, 2022.

WASHINGTON – Under pressure to resign for declining to say whether he accepts the scientific consensus on global warming, World Bank president David Malpass said on Thursday (Sept 22) it was clear greenhouse emissions are causing climate change and defended his record as bank chief.

Malpass sought to restate his views in a note to staff and an interview on CNN International, during which he was asked if he was a climate change denier.

His views drew scrutiny after he refused to say during a public event this week whether he believes fossil fuel burning is warming the planet.

"It's clear that greenhouse gas emissions are coming from manmade sources, including fossil fuels, methane, the agricultural uses, the industrial uses, so we're working hard to change that," Malpass said.

Malpass has long faced criticism from climate advocates, who renewed calls on President Joe Biden to replace Malpass. His remarks at a climate event hosted by the New York Times on Tuesday also rekindled concerns about the bank's lack of a deadline to stop funding fossil fuels.

Speaking onstage during a panel on climate finance, Malpass was asked several times whether he believes the "manmade burning of fossil fuels is rapidly and dangerously warming the planet."

He tried to dodge the question before saying: "I don't even know. I'm not a scientist."

The president of the US, the largest World Bank shareholder, traditionally nominates World Bank presidents, subject to confirmation by the bank's board.

Biden, in New York for the UN General Assembly, did not respond when reporters asked him if he has confidence in Malpass.

The White House has not commented on the controversy.

Sources following the issue said the Biden administration had thus far not wanted to remove Malpass before his term expires in early 2024, but that his comments this week could change that calculus, despite his efforts to "clarify" his views. 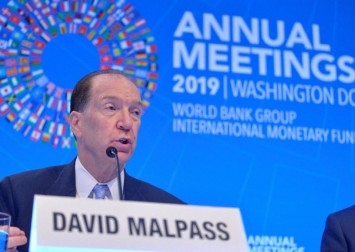 In a note to World Bank staff, seen by Reuters, Malpass said the "sharp increase in the use of coal, diesel, and heavy fuel oil in both advanced economies and developing countries is creating another wave of the climate crisis."

He added: "Anything seen in a different light is incorrect and regrettable".

Activists and former climate advocates worry the Bank is falling short on climate action. Last year, over 70 non-governmental organisations jointly called for Malpass to be replaced, citing a lack of action.

The World Bank reduced its new coal power investments in 2013 and stopped funding upstream oil and gas operations in 2019, but has so far resisted pressure from European board members and climate campaigners to phase out fossil fuel financing entirely.

In January last year, the Bank's board approved a US$620 million (S$880 million) investment in a multibillion-dollar liquified natural gas project in Mozambique, drawing criticism from climate activists.

This, "in turn, threatens the Bank's relevance in every other area, including its mission to alleviate poverty and promote sustainable growth," Waters said.