Dairy farmers Andrew Powell (left) and his father, who are both volunteer lifesavers, died trying to rescue a man from waters near the Twelve Apostles off the Victoria state coast.

MELBOURNE - A father and son life-saving team drowned while trying to save a tourist swept out to sea near one of Australia's most famous sights off the south coast, officials said on Monday (April 22).

Mr Ross Powell, 71, and his son Andrew, 32, died on Sunday after their life-saving boat overturned in the surf during the rescue of a 30-year-old man near the Twelve Apostles, a set of 12 limestone stacks off the Victoria state coast.

The tourist, whose nationality and name have not been released, had been wading at the mouth of a river when he got into trouble.

He was winched from the water alongside a third lifesaver from the boat, who was seriously injured, by a rescue helicopter and taken to hospital, Victoria Police said.

The bodies of the Powells were found in the water shortly after.

The tragedy has rocked the small tourist town of Port Campbell where the two men came from, with Prime Minister Scott Morrison leading the tributes.

"Surf lifesavers are selfless & brave. We thank them all for their service & extend our deepest sympathies to Ross & Andrew's family & friends," Mr Morrison tweeted on Monday.

We mourn the loss of Ross & Andrew Powell, from Port Campbell SLSC, who lost their lives trying to save the life of a tourist in Victoria. Surf lifesavers are selfless & brave. We thank them all for their service & extend our deepest sympathies to Ross & Andrew’s family & friends

Surf Lifesaving Victoria president Paul James hailed the pair as heroes, and said the conditions had been rough and "not the place to be swimming".

"It's just terrible, it's heartbreaking," he told reporters in an emotional press conference of the death of the dairy farmers and experienced volunteer lifesavers. 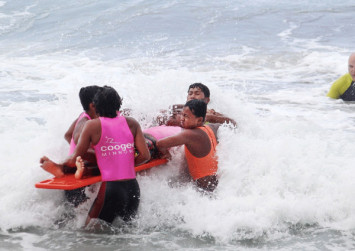 "I understand the boat was operating in a 2m swell, so a very high swell, and we know that it is very treacherous down there... These brave people, these heroes, have gone out to try and help."

Ms Amber Griffiths, the partner of Andrew and who local media reported was pregnant with their second child, wrote about her heartbreak on Facebook.

"Today we lost two of the most beautiful people to ever exist - always putting others first," she wrote.

"The love of my life, light of my life, father of my baby girl. My heart is broken. I miss you Andrew Powell."

Australia's beaches are among the island continent's biggest tourist draws, but can have strong rips and tides. Swimmers are advised to keep between areas bounded by flags and patrolled by lifesavers.

The area where the tourist was rescued is near high cliffs and said to have wild and treacherous seas.

The Twelve Apostles are giant rock stacks of varying heights in the Southern Ocean which began forming 20 million years ago when erosion gradually began whittling away the limestone cliffs of Port Campbell.