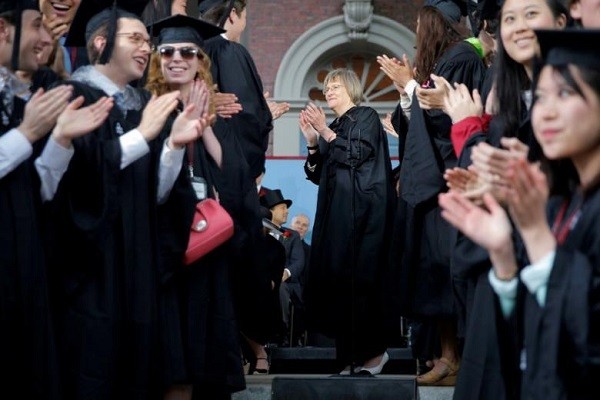 BOSTON - Former Harvard University President Drew Faust on Thursday (Nov 1) rejected claims that the Ivy League school discriminates against Asian-American applicants, saying that doing so would be "totally at odds with what we believe".

Faust, who stepped down as president in June, made the remarks on the witness stand in Boston federal court, in a closely-watched trial that could have wider implications for the role of race in US college admissions.

The trial, which is expected to end on Friday, has pitted the Cambridge, Massachusetts university against Students for Fair Admissions (SFFA), which was founded by an anti-affirmative action activist and whose case is backed by the Trump administration.

Faust testified that much of her tenure had been dedicated to expanding access to Harvard, saying that financial aid to the elite college was increased under her watch and that several committees examined how to promote racial diversity.

"We've made progress, but there's still work to be done,"she said.

She denied that Harvard discriminated against Asian-American applicants. She noted that 23 per cent of Harvard's current freshman class are Asian-Americans, up from around 3 per cent in 1980.

The non-jury trial before US District Judge Allison Burroughs has provided a rare look into how the private university selects applicants from a pool of about 40,000 annually for around 1,600 seats.

Legal experts have said the case has the potential to reach the US Supreme Court, giving the newly cemented five-member conservative majority a chance to bar the use of affirmative action to help minority applicants get into college.

In previous rulings on affirmative action, which aims to offset historic patterns of racial discrimination, the Supreme Court has allowed colleges to include race as one factor among others in assessing applicants.

But SFFA alleges Harvard went further than the court has allowed by engaging in "racial balancing" and keeping Asian-American admissions in the years before SFFA sued in 2014 at or under 20 per cent annually.

Harvard denies the allegations and says that its approach to promoting student body diversity is in keeping with Supreme Court precedent.

SFFA is headed by Edward Blum, an activist involved in other cases that have challenged the use of race in colleges admissions.