Former Spanish king, Juan Carlos, leaves after attending the funeral ceremony of Luxembourg's Grand Duke Jean at the Notre-Dame Cathedral in Luxembourg, on May 4, 2019.

MADRID - Spain’s former king Juan Carlos has decided to leave his country, a dramatic exit designed to protect the monarchy after a barrage of corruption allegations surfaced against him.

The once-popular, now scandal-ridden, king left Spain before Monday’s announcement, local media said, with no indication of where he may have gone.

The bombshell move stunned Spaniards and left them divided over whether the 82-year-old, who keeps the title of King Emeritus, was right to depart or should have stayed to face justice.

Pressure had been building for weeks on the former king and his son, King Felipe, to take action to shore up the monarchy, after Spanish and Swiss prosecutors started looking into allegations of bribes over a high-speed rail contract.

The palace statement quoted Juan Carlos’ letter to Felipe as saying that he wanted to enable him to rule untroubled “amid the public repercussions that certain past events in my private life are generating”.

“Guided by my desire to do what is best to serve the Spanish people, its institutions and you as king, I am informing you of my ... decision to leave Spain at this time.”

Read Also
Art or show? $310k to burn down a statue of Spain's king 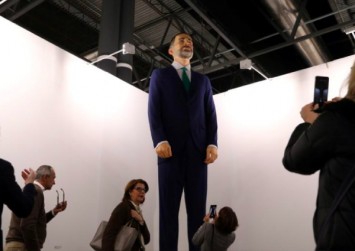 King Felipe thanked Juan Carlos for his decision, underlining “the historic importance that his father’s reign represents” for democracy in Spain.

Juan Carlos came to the throne in 1975 after the death of General Francisco Franco and was widely respected for his role in helping guide Spain from dictatorship to democracy.

But his popularity sank in later years due to a series of scandals, prompting him to step down in 2014.

Juan Carlos’ lawyer, Javier Sanchez-Junco said in a brief statement that despite his decision to leave, the former king would “remain at the disposal of the prosecutors’ office”.

Amid much speculation over where he could be, Portuguese TV channel TVI24 and the Correio da Manha tabloid said Juan Carlos was in Cascais, a resort area near Lisbon, where he spent part of his childhood. They did not cite any sources.

That was followed by a regular drip-feed of allegations in the Spanish media, including that he gave much of the money to a former mistress.

Through Sanchez-Junco, Juan Carlos has repeatedly declined to comment on the corruption allegations. Spanish monarchs have immunity during their reign but Juan Carlos’ abdication potentially leaves himself vulnerable to prosecution.

Juan Carlos’ departure comes at a difficult time for Spain, hit by one of Europe’s worst coronavirus outbreaks at a moment when local politics is tense and polarised.

“Juan Carlos de Borbon’s flight abroad is an act unworthy of a former head of state and it leaves the monarchy in a very compromised position,” Iglesias said on his Facebook page.

His party’s parliamentary group went further, saying in a statement there was no reason to continue with a monarchy “lacking the minimum ethical values,” potentially opening a rift with its government partner, the Socialist Party, which defends the monarchy.

Some voters agreed Juan Carlos should not have left.

“If he has done it, he should pay for it and stay,” Juan Casado, a teacher from Cordoba, said on a visit to Madrid, referring to the corruption allegations. 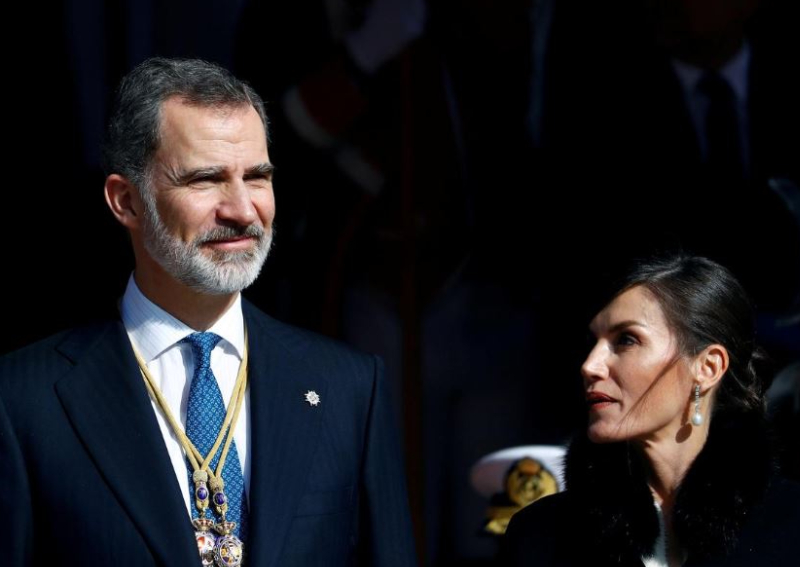 Spain's King Felipe VI and Queen Letizia attend a military parade after a ceremony to inaugurate the XIV Legislature at Parliament in Madrid, Spain on February 3, 2020. PHOTO: Reuters

Others in Madrid regretted his departure, pointing to his role in Spain’s return to democracy.

“This person has done a lot for Spain, with dark and bright moments, of course, but he has done more good than harm,” pensioner Pilar Romero said.

Opinion polls have shown that Spaniards are roughly equally split over whether their country should remain a monarchy or become a republic - a step that is impossible under the current constitution, itself very hard to change amid a highly fragmented parliament.

Local media including El Mundo and broadcaster TVE said Juan Carlos had left Spain, with some, including La Vanguardia, saying he had already left on Sunday. The Royal House and government officials declined to comment and Juan Carlos’ lawyer did not respond to a request for comment.

The government had repeatedly asked Felipe to take steps to distance himself further from his father after he put an end to his father’s palace allowance and renounced his own inheritance in March, following allegations of secret offshore accounts reported to be linked to the Saudi rail contract.