LONDON - London Mayor Sadiq Khan said police were working around the clock after four people were murdered in a bloody 28-hour period for Britain's capital, including a heavily pregnant woman who was stabbed to death.

Kelly Mary Fauvrelle, 26, was around eight months pregnant when she died in the early hours of Saturday morning in south London. The baby was delivered and remains in a critical condition. A 29-year-old man is in police custody.

In three separate incidents, two men died from stab wounds and a third following a fight, as the wave of violent murders that has gripped the capital continued. Five people have been arrested.

The spate of deaths has drawn the attention of the US President Donald Trump and British rapper Stormzy. 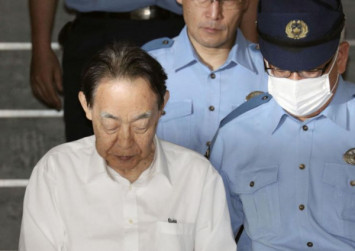 "Violence against women is endemic in society and devastating murders in the home, like this one, show the scale of the problem we face. My prayers are with this innocent child, and with the mother it has so tragically lost."

The spate of violent crimes has been seized on by Trump, who said earlier this month that Mayor Khan was a "disaster" and the situation would "only get worse" if he was not replaced.

Stormzy wore a Union Jack emblazoned stab-proof vest designed by the street artist Banksy for his history-making and politically charged headline performance at the Glastonbury Music Festival on Friday.

Prime Minister Theresa May has been fighting accusations that a funding squeeze on police as well as cuts in social services have contributed to a soaring incidence of knife-crime.

According to official statistics, there were 285 fatal stabbings in England and Wales in 2018, the highest level since records began more than 70 years ago.

Boris Johnson, the former London mayor who is favourite to replace May as prime minister in July, has vowed to increase police numbers if he is elected.

The Metropolitan Police said they were working day and night to pursue offenders and take weapons off the street.