The boss of the Monaco Grand Prix is planning to reverse Formula One's recent modernisation of some traditions by retaining 'grid girls' at the glamorous Mediterranean race weekend in May.

The sport announced it was replacing 'gird girls' with 'grid kids' before the start of the 2018 season in a move that was well received despite misgivings from older traditionalists.

The new 'grid kids' who accompanied the F1 drivers on the grid were karting and junior racing drivers at last month's season-opening Australian Grand Prix in Melbourne.

But the chief organizer of this year's Monaco race to take place on May 27 has insisted on retaining the grid girls. 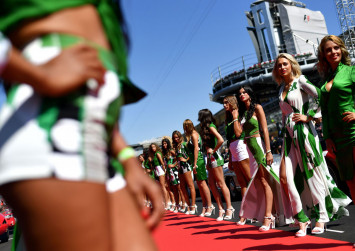 "They understand that Monaco is not Spa, or Monza," he said. "We've had no problems with Liberty Media. Except for the grid girls issue.

"They'll be there on the grid, but they won't be holding any name-boards. They're pretty - and the cameras will be on them once again."

Russian news agency Interfax has reported that the Russian Grand Prix at Sochi in September may also feature the use of grid girls.

It reported that deputy prime minister Dmitry Kozak supported the tradition, adding that it will continue 'if we can reach and agreement….Moreover, our girls are the most beautiful."