HONOLULU - Human error and a lack of adequate fail-safe measures during a civil defence warning drill led to the false missile alert that stirred panic across Hawaii over the weekend, a state emergency management agency spokesman acknowledged on Sunday.

Elaborating on the origins of Saturday's false alarm, which went uncorrected for nearly 40 minutes, spokesman Richard Rapoza said the employee who mistakenly sent the missile alert "has been temporarily reassigned" to other duties.

Rapoza said an internal investigation of the blunder would be completed by week's end and that the Hawaii Emergency Management Agency welcomed outside review by the Federal Communications Commission, which has jurisdiction over wireless US alert systems.

Rapoza also said that no further drills of the emergency alert system would be conducted until new measures were put in place to reduce the chance of future false alarms and to swiftly withdraw any warnings sent in error.

FCC Chairman Ajit Pai said on Sunday that the agency's probe of the incident so far suggested "reasonable safeguards or process controls" were lacking, a point that Rapoza said officials at the Hawaii Emergency Management Agency did not dispute. 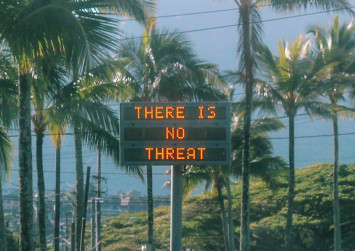 The error occurred when, in the midst of a drill during a shift change at the agency, an employee made the wrong selection from a "drop-down" computer menu, choosing to activate a missile launch warning instead of the option for generating an internal test alert, Rapoza said.

The employee, believing the correct selection had been made, then went ahead and clicked "yes" when the system's computer prompt asked whether to proceed, Rapoza said.

'NOT MAKING ANY EXCUSES'

It was transmitted to mobile phones and broadcast on television and radio across the Pacific island state shortly after 8 a.m. on Saturday, and took 38 minutes to be retracted by an official all-clear message.

The mistake unleashed hysteria and confusion across the state, home to some 1.4 million people and a heavy concentration of US military command structure.

Civil defence officials have said that in the event of a real missile attack from North Korea, people in Hawaii would have only about 12 minutes to find shelter.

In November, Hawaii said it would resume monthly statewide testing of Cold War-era nuclear attack warning sirens for the first time in at least a quarter of a century, in preparation for a possible missile strike from North Korea.

Ige, who said he was "angry and disappointed" by Saturday's incident, said some sirens went off after the false alarm.

To prevent a repeat, the Emergency Management Agency will now require two employees to activate the alert system - one to issue the warning and another to confirm it. The agency also has incorporated a way of issuing an immediate false-alarm notice in the event of an error.

"That's something we were lacking yesterday," Rapoza told Reuters by telephone. "Our focus was on getting the message out quickly, and not enough attention was paid to what happens if there's a mistake. And frankly, that was a failure of planning on our part. We're not making any excuses for it."

Criticism of the emergency management agency was swift.

Lee Cataluna, a columnist for the state's largest newspaper, the Honolulu Star-Advertiser, wrote in an opinion piece published on Sunday: "It's the time for outrage. Somebody needs to get fired."