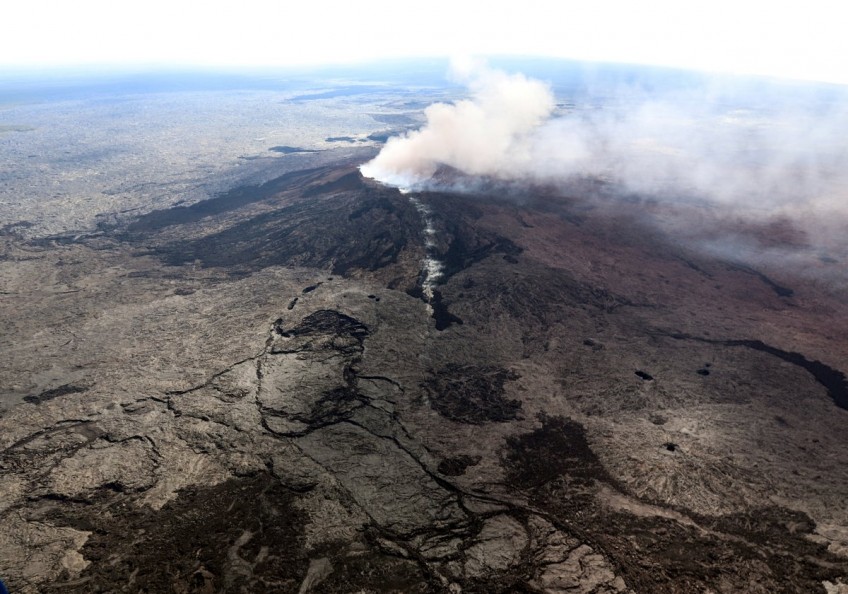 PAHOA, HAWAII - Hawaii residents drove through clouds of sulphur and over roads splitting open to make desperate and possibly last visits home on Tuesday (May 8) before another eruption by the Kilauea volcano, which has already destroyed 35 homes and other structures.

The explosions from Kilauea, which began five days ago, paused on Tuesday long enough for many of the roughly 1,700 people ordered to flee their homes in the hardest-hit Leilani Estates area to rush back in for pets or cherished belongings they were forced to leave behind.

"The way it looks now, I thought I'd try one more time to get my things out," US Army veteran Delance Weigel, 71, said while collecting some of his prized possessions shortly after 7am on Tuesday as steam and sulphur dioxide gas rose out of cracks in the street.

"Whether we lose our home or not, we'll see. But we're definitely going to be cut off," Mr Weigel said. "You move to paradise, then this happens."

So far, no deaths or major injuries have been reported since Kilauea, which has been in a state of nearly constant eruption since 1983, began a series of major explosions on Thursday, spewing fountains of lava as high as 90 metres into the air and spewing deadly volcanic gas up through cracks in the earth.

Kilauea predominantly pours basaltic lava flows into the ocean, but occasionally experiences more explosive events such as the one that began last week.

Most of the 1,700 residents ordered to evacuate live in Leilani Estates, where lava has been bubbling out of some 4km of fissures in the ground emanating from Kilauea lava tunnels on the eastern side of the Big Island.

Homeowners in another community, Lanipuna Gardens, were required to leave because of toxic volcanic gases.

New areas could be subject to evacuation as fingers of the fissure system slowly spread eastward, threatening neighbourhoods that until now had been considered safe.

"There's still plenty of magma under the ground. Seismicity is still up," Hawaii Civil Defence Administrator Talmadge Magno told a community meeting on Monday night. "If things get dicey, you got to get out."

On Friday, the southeastern corner of the island was rocked by a powerful magnitude 6.9 earthquake on the volcano's south flank, the strongest since 1975, and more quakes and eruptions have been forecast, perhaps for months to come.

"This pause is likely temporary and resumption of lava emission or additional fissure outbreaks are possible at any time," the Hawaiian Volcano Observatory said in a statement on its website.

Kilauea has opened 12 volcanic vents since it started sending out fountains and rivers of lava as hot as 1,093 degrees Celsius on Thursday, officials said.

Ms Heide Austin said she left her home just west of the eruption zone on Monday afternoon after noticing cracks appearing at the end of her driveway.

One eruption near her home "sounded like a huge blowtorch going off", said the 77-year-old, who lives alone. "That's when I really got into a frenzy."

Hawaii's 10,430-square-km Big Island accounts for less than a fifth of the state's tourism.

State data show that in the first three months of 2018, 16 per cent of the US$4.81 billion (S$6.46 billion) visitors spent in Hawaii came from the Big Island, less than half of the levels seen on the islands of Oahu and Maui.